Quitters never win? But what if you are quitting smoking? Eric’s diary – Part Thirteen

A decent week it has to be said.

66 days off the smokes is no mean achievement for anyone. That's over nine weeks now. Don't worry, I have all the permutations worked out.

You do that a lot when quitting something. You analyse, rationalise, synchronise, fantasise and any other words which finishes in 'ise'.

No longer with Concussion

That may seem like a pretty drastic thing to say for someone coming off the smokes. Concussion?! Pardon?! Did I miss something.

I am of course referring to the nationwide stand-up tour I did with PJ Gallagher and Joanne McNally. It was called the Concussion tour. 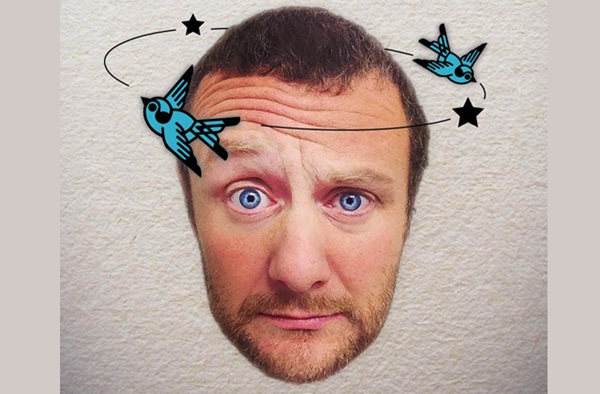 Last Friday night was the last night of the tour and what a way to finish, in front of a packed Vicar Street audience.

There was a certain amount of sadness too as I had really enjoyed traipsing around the country with PJ and Joanne. We were a little family away from our own families and I will miss that comradery and craic.

I was a little bit more nervous than usual. People ask if I get nervous before a show.

Thousands of ex-smokers could cash in on life insurance change

END_OF_DOCUMENT_TOKEN_TO_BE_REPLACED

I always get nervous before any show. It doesn't matter if it's 5,000 people at Live at the Marquee in Cork or 11 people in a pub in Dublin, the nerves are always there.

Obviously, there are times when the nerves are more prevalent and last Friday was one of those nights. I probably would have enjoyed a cigarette to calm me down, but the guilt afterwards would have been overwhelming.

To throw away all that good hard work of the previous nine weeks. I resisted thankfully and the health kick goes on.

Things to do in the sun

A new challenge has presented itself in the form of the sun. I associate good sunny weather with kicking back, enjoying the rays, cold drinks and of course having a smoke.

Even when I went on holidays to the sun having a cigarette was always on my mind. In fact, I would probably smoke more than usual when the sun shines, almost chain smoking. 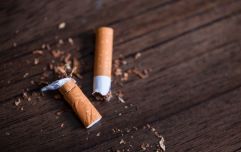 END_OF_DOCUMENT_TOKEN_TO_BE_REPLACED

Not exactly sure why, but I think it was just something to do in the sun. Something to alleviate the boredom of just sitting there, doing nothing. It's odd logic admittedly, but it helped.

The recent good weather has me a bit fidgety. What are you supposed to do? Just sit there?! Well, yes. That's exactly what you do and it's exactly what I did and it was fine.

As mentioned in the previous diary, I am now keen to take this health kick to the next level. Having been off them over nine weeks now, I want to get fit and into shape.

I have piled on the pounds. It's not so much to do with the quitting smoking, but more to do with the fact that I don't seem to have the time for the gym now. There aren't enough hours in the day or something.

That's just making excuses. I will now be finding the time to push my new lung capacity to the max and see how fit I can get. Currently getting prices from gyms in the city centre and will hopefully sign up to one of them very soon.

I checked in to my HSE Quit page yesterday and it tells me how many days I've been off the smokes, how much money I have saved and what I could spend that money on. Here's a screen shot of what it told me: 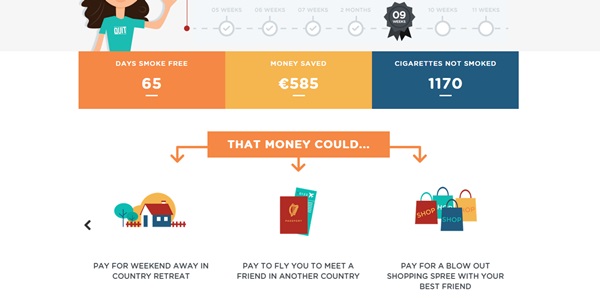 €585? A weekend away in a country retreat you say, eh? A blow out shopping spree with my best friend? Fly to meet a friend in another country? My missus would be furious.


popular
Motorist in Kildare caught driving with tax 13 years out of date
Fine Gael preparing to go into opposition following parliamentary party meeting
QUIZ: How well do you know Will Smith's movie career?
The best places in Ireland for breakfast and brunch have been revealed
Man (40s) killed after walking in front of oncoming truck after driving into a ditch
BBC will show an 'immensely powerful' documentary about The Troubles tonight
Over 200,000 people have signed petition demanding change in how media treats those in the public eye
You may also like
6 months ago
Irish Heart Foundation wants Government to raise the price of cigarettes to €20 a packet by 2025
6 months ago
Catalonia plans to introduce outdoor smoking ban
7 months ago
Netflix set to cut back on smoking scenes in its original shows
10 months ago
Gardaí uncover an illegal cigarette factory in Dundalk
10 months ago
Disney World has announced several new rules for theme park visitors
1 year ago
U.S. politician proposes bill that will raise legal smoking age to 100
Next Page