The 10 indisputably worst flags in the world

Flags are so hard to get right, you have to get the right blend of emblems and colours while still designing them in such a way that represents your country. Or someone else’s country if you’re an outside contractor on double time.

But flags are really easy to get wrong. Really, really easy. Roman Mars, the man behind the incredible podcast 99% Invisible, did a fantastic TED talk on designing flags and I recommend you go and watch it. Maybe after you’ve read this article though. 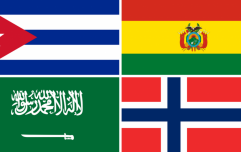 QUIZ: Can you beat your friends in this world flag quiz?

END_OF_DOCUMENT_TOKEN_TO_BE_REPLACED

There are a few people that didn’t bother watching Roman’s talk – the people who designed the 10 (well… 12, but more on that later) awful flags that make up this list.

If I were to rank all 197 national flags, and I did plead with JOE to let me do that, then these would be your bottom 10. These would be the ones relegated from the league of flags to be replaced with the likes of Aruba, the Cook Islands and Guadeloupe on the national stage.

If these flags were hung in a gallery then your Dad would look at them, put his hands on his hips, let out a sigh and confidently tell you and anybody else who will listen that he "could do that himself".

So, brace yourselves. Shield your eyes. Prepare to write your letters of complaint to JOE when you inevitably disagree. Here are the 10 worst flags in the world.

I’ll level with you; this flag is mostly fine. The red and yellow are balanced well and the symbol in the middle represents a yurt. It’s mostly fine. So what is this doing in the number 10 position of the worst flags in the world? Kyrgyzstan is really hard to spell, and that loses you valuable time on Sporcle’s flag quizzes.

ACTUAL FLAG FACT: The red was chosen as it was the colour used on a flag created by Manas the Noble, a national hero who united 40 tribes together to create Kyrgyzstan.

9. Indonesia. And Monaco. And Poland.

Lads, please, just agree on one of you having this flag and then the other two can make a couple of new flags. It’s not even a good flag anyway, it’s pretty boring, so just think of the fun you could have if you redesigned it: stars, horizontals, AK-47s, birds of paradise, Petr Cech's helmet... 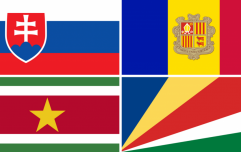 The hardest world flag quiz you will ever, ever take

END_OF_DOCUMENT_TOKEN_TO_BE_REPLACED

Dragons are cool nowadays, they’re on Game of Thrones and are no longer the reserve of board games that need 46 sided dice. Dragons on flags, however, are not cool.

Look at that dragon, now imagine trying to draw that as a 10-year-old alone in your room because nobody wants to play with the weird flag boy. It’s impossible to make it look any good, it’s far too complicated to be on a flag. And the same goes for you, Wales.

ACTUAL FLAG FACT: What look like apples in the dragon’s claws are actually jewels, and symbolise the wealth of Bhutan.

A controversial choice, many lesser (dare I say “amateur”) vexillologists rank the flag of Kiribati as one of their favourites, but like Bhutan’s flag, it’s just far too complicated and busy. Kiribati’s flag would look more at home in a colouring book, and not a very good one at that.

ACTUAL FLAG FACT: The flag of Kiribati is one of only three national flags that has a design which corresponds exactly to that of the shield on their coat of arms.

It’s like somebody copied and pasted a coat of arms from Google Images onto Liechtenstein’s flag and forgot to get a coat of arms that had a transparent background. Wikipedia probably puts it best when it says, “The flag of Haiti is a bicolour flag featuring two horizontal bands coloured blue and red, defaced by a white panel bearing the coat of arms”.

ACTUAL FLAG FACT: The original flag was created when a French flag was torn apart, and the blue and red sections were sewn back together.

The flag of the Maldives has the same problem that the flag of Haiti has, it looks like somebody stuck an image onto a background that was probably meant for somewhere else, and then hoisted it up a flagpole. Only the Maldives decided against having some colours that go well together and just went with red and green.

ACTUAL FLAG FACT: The flag of the Maldives was originally plain red, but the Islamic crescent and green background were added in 1948 upon independence from Sri Lanka.

Black. Yellow. Red. Black. Yellow. Red. It’s bad enough that Germany and Belgium went with that colour combination, but at least they didn’t do it twice. Uganda’s flag ends up looking like everything your grandma bought at a Tupperware party in the 1970s with a Nando's logo stuck on it.

ACTUAL FLAG FACT: The bird in the centre of the flag is actually a crane, and is the national badge of Uganda.

If you’ve not watched the video of Roman Mars yet then *SPOILERS*, but if you have then you’ll know the main thing to avoid when creating a flag is a seal, or a coat of arms. Belize didn’t bother heeding that advice, and maybe they should be applauded for having a rebellious streak.

But no, their rebellious streak caused this abomination to be created.

ACTUAL FLAG FACT: The men on the coat of arms, along with their tools and mahogany, represent the logging industry.

Food. Music. Netflix Originals. There’s some things the USA are great at. Flags aren’t one of them. It isn’t a bad flag per se, it’s more bad because of what it represents.

Every film where the Americans come and save the day; Independence Day, Armageddon, Team America: World Police, the star spangled banner will be flying high and reminding you all how great America thinks it is. Stop pledging allegiance to this terrible flag, and pledge allegiance to BoJack Horseman instead.

ACTUAL FLAG FACT: If a new state joins the Union, they must wait until the following July 4 for a representative star to be added to the flag.

Let’s not beat around the bush here; it’s an awful flag. All those points and angles, it comes across as too aggressive, too angry. And if the flag wasn’t bad enough on it’s own, it goes and invades other flags as well.

Spare a thought for Tuvalu – their flag could have been great but it has to share space with the Union Flag; like if Adam Sandler rocked up in The Godfather. If this flag was on fire, you wouldn’t put it out. Or you’d contact the Daily Mail, depending on who you are.

ACTUAL FLAG FACT: Permission to fly the Union Flag on land was only granted in 1915, by King George V.

popular
Covid Restrictions: What can we expect to see today?
The JOE Friday Pub Quiz: Week 278
Hospitality groups insist they're ready and able to reopen fully this weekend
Iconic singer and actor Meat Loaf dies aged 74
QUIZ: Can you get 15 out of 15 in this tricky science quiz?
NPHET recommends major easing of Covid restrictions, including 8pm hospitality curfew
Here's the line-up for this week's Late Late Show
You may also like
3 years ago
Flying the tricolour and other Irish flags could be a criminal offence in Scotland
4 years ago
There were the best, and funniest, flags at Glastonbury 2017
7 years ago
Picture: NBC's coverage of the Winter Olympics made a pretty big mistake with these flags
8 years ago
Class infographic showing how many players from each country are in the Premier League
1 month ago
New airline to provide low-cost flights from Ireland to Iceland
1 month ago
Bewley's has just launched a Christmas Market in their iconic Grafton Street home
Next Page