Given Pokémon GO's unrelenting quest for total world domination, it shouldn't come as much of a surprise that new parents are so caught up in the game that they're naming their children after Pokémon characters.

According to US parenting website BabyCenter, there has been a noticeable spike in a variety of names than can surely only have been inspired by the Japanese franchise. 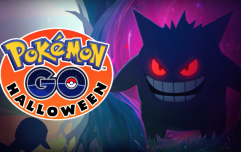 Pokemon Go is coaxing players back in for Halloween

END_OF_DOCUMENT_TOKEN_TO_BE_REPLACED

The site says that half of its users are playing the smartphone game, and although we still appear to be waiting to welcome a Blastoise, Tentacruel or Machamp into the world, there are certain Pokemon names that are enjoying a real surge in popularity.

Kicking off, there are 1,983 more baby girls being named Evee this year than there were in 2015.

Even more impressive/ridiculous is that the name Onix has climbed by 4,377 in 2016.

Also up is Ash, because every parent wants their child to be the very best like no one ever was.

The name Jynx has absolutely shot up in 2016. We wonder why.

The girl's name Mew has also cropped up 8,809 times this year, up nearly 6,000 from last. It seems the human Mew is a lot easier to come by than the illusive Pokemon version.

And as for Pikachu - some might say the most iconic Pokemon and therefore a bold name to bestow upon your newborn - we couldn't find any data on BabyCenter's website, but the name exists in the search engine. It's only a matter of time...

popular
QUIZ: You'll need to be razor-sharp to get 100% in this General Knowledge Quiz
The JOE Friday Pub Quiz: Week 307
The JOE Music Quiz: Week 117
An exciting Irish crime thriller is among the movies on TV tonight
Shooting stars set to light up Ireland's skies this weekend
James May reportedly hospitalised after crashing into wall at 75mph filming new show
Record for hottest August day in Ireland ever has now been broken
You may also like
3 years ago
The reviews are in for the new Harry Potter game from the makers of Pokémon Go
3 years ago
I tried out The Vatican's version of Pokémon Go in Dublin and it changed my life forever
3 years ago
Catholic Church launch their own version of Pokemon Go where you have to find saints
5 years ago
Pokemon Go introduce new 'buddy system' with their latest update
6 years ago
John Boyega is definitely playing Pokemon Go while filming Star Wars VIII
6 years ago
It looks like Pokemon Go has made it much harder to catch Pokemon
Next Page