Have you ever had one of those nights where you're so bladdered that you decide to take a load of filtered selfies and send them off with your application for an NUS Card?

Nightmare isn't it? But 19-year-old Daire Shaw, a law student at Liverpool John Moores University, got a bit of a shock when his photos were accepted.

Shaw, from Belfast, had a late one at a DJ night last year, and when he finally rolled in at about 5:30am he thought he'd take a few Snapchat selfies. So far, so millennial. 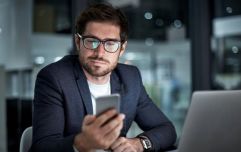 END_OF_DOCUMENT_TOKEN_TO_BE_REPLACED

But for whatever reason, the teenager eventually found himself on the NUS website, and decided it was as good a time as any to submit an application for his card. When the site asked for a photo it seemed like an obvious choice to use the one where he looked like an extra-terrestrial.

But instead of getting a telling off for taking the piss, the photo somehow made it onto his card. In a post uploaded to Facebook (which now has over 13,000 likes), Daire wrote: "Jesus Christ, I drunkenly applied for my NUS card and it asked for a photo so I picked one with a Snapchat filter. Why did they accept this? I can never use it as ID."

Speaking to Metro about his new identity card, the student said: "I’d completely forgotten I even did it until I checked my post on my birthday and saw the card.

"I’m pretty sure they thought I genuinely looked like that and were too worried to ask any questions. No one from NUS or anything has been in contact with me about it either."

It has worked, though. Daire said he'd already taken the card for a test run in River Island, and while the checkout operator did a 'double-take' when he handed it over, they decided to just roll with it.

Considering it'll cost £12 for a replacement - you can buy a lot of hangover Pot Noodles with that sort of money - it's not surprising that Daire intends to stick with the ID. Plus, with that in his wallet he'll never be short of a conversation-starter.

The Big Reviewski || JOE · The Big Reviewski with Dune, a mini-Hangover reunion & the best of Timothée Chalamet
popular
PICS: The man with the biggest penis in the world has one unbelievable problem with it
Report: Crew left Alec Baldwin film set in protest before fatal shooting
The JOE Friday Pub Quiz: Week 266
The 50 most iconic songs of all time* have been revealed
The JOE Music Quiz: Week 78
People think they've figured out the ranking of the viewers on your Instagram Stories
Dublin museum voted Europe’s leading visitor experience... again
You may also like
2 years ago
Instagram said to be working on a new app to rival Snapchat
2 years ago
Arnold Schwarzenegger releases statement after getting dropkicked at event
2 years ago
Episode 2 of JOE's Snapchat show Argue Me is live: Tinder or the old-fashioned way?
2 years ago
JOE launches 'Argue Me' — a new show on Snapchat Discover
2 years ago
Snapchat announces five new unique Irish Shows for its Discover feature
3 years ago
Plastic surgeons report increase in procedures to make people look more like they do on Instagram
Next Page