Pic: A Monaghan lad is selling his car on DoneDeal because he's been in Vegas for two days and he's broke

The original Hangover movie may have been a slightly exaggerrated portrayal of what can happen to a group of lads on holiday in Vegas, but there's a grain or two of truth there too.

Let's just say it didn't get its notorious reputation for no reason. 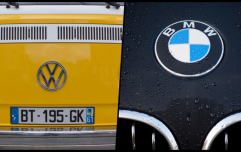 END_OF_DOCUMENT_TOKEN_TO_BE_REPLACED

Some people can handle what Vegas has to offer and some cannot and one Monaghan man currently holidaying there certainly falls into the latter category.

Sure, this could well be a prank carried out by either himself or his mates, but there's a 2007 Volkswagen Golf currently for sale on DoneDeal being advertised by a man from the Farney County who claims not to have a bean to his name after two nights in Sin City. 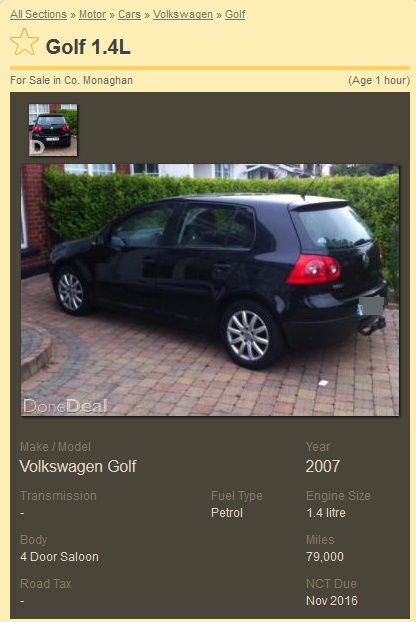 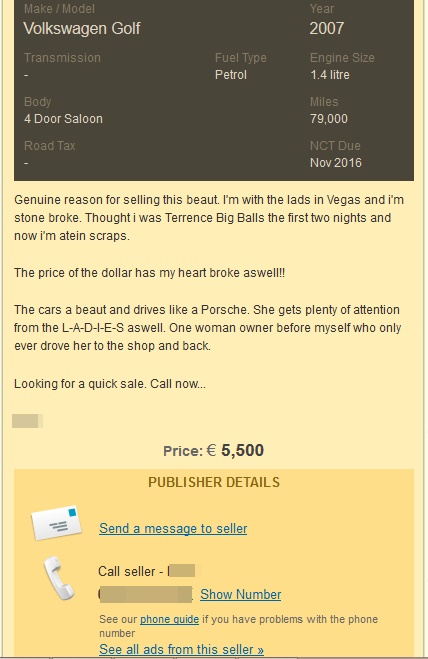 The current strength of the dollar compared to the Euro hasn't helped either.

If you're in the market for a 2007 Golf, you can check out the ad and see if the seller is genuine about selling and his reasons for doing so here.

He's asking for five and half grand for a motor he clearly has a lot of love for and if a sale does go through, that should get him through to Friday at the very least.

Hat-tip to Ciaran Morgan for sending this one our way

The Big Reviewski || JOE · The Big Reviewski with Ray Liotta, Goodfellas facts & Tom Hanks making us cry
popular
Netflix has just added arguably the very worst movie of the last decade
The 50 most iconic songs of all time* have been revealed
PICS: The man with the biggest penis in the world has one unbelievable problem with it
EU lorry drivers vow not to help UK get “out of the s**t they created themselves”
Four major employers join forces to create Ireland’s first remote working alliance
The five best true crime documentaries to watch on Netflix this weekend
Here’s what graduates from Irish colleges can expect to earn in the workplace
You may also like
4 months ago
The iconic 'Bus W***ers' car from Inbetweeners is now up for sale
5 months ago
Two killed after Tesla car crashes with no one in driver's seat
6 months ago
Over 170 cars clocked speeding on Irish roads in first two hours of National Slow Down Day
6 months ago
Ireland's first average speed cameras to be introduced on mainline motorways
6 months ago
Motorists warned of 'ghost broking', as 70% of drivers are unaware of the practice
7 months ago
Trade union hits out at driving tests cancelled because weather was "too cold"
Next Page