The start of a blossoming friendship?

According to Reuters, rival car giants, Toyota and Mazda are expected to put their rivalry aside on Friday to start the construction of a $1.6 billion US assembly plant.

A source told Reuters that the new joint venture will mean that the plant will be able to produce 300,000 vehicles a year as well as employing around 4,000 people when it is opened in 2021.

Production will be divided between the two automakers and the new plant would be a huge boost to President Donald Trump who promised to increase manufacturing and expand employment for American autoworkers.

The location has yet to be decided but the source said that the plant was expected to build Toyota Corolla cars and a Mazda crossover utility vehicle.

Both Toyota and Mazda signed an agreement in May 2015 which stated that the pair would explore various areas of collaboration. 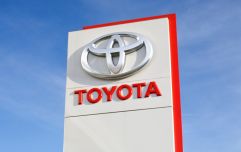 Toyota Ireland recall over 11,000 cars in Ireland for fears of "injury or death to vehicle occupants"

END_OF_DOCUMENT_TOKEN_TO_BE_REPLACED

This would not be Mazda's first collaboration with another car company. Mazda had a long-running alliance with Ford until they decided to sell its stake in the company in 2008.

A partnership between Toyota and Mazda, who are both Japanese automakers, would give both more flexibility and capacity and would help them save money in the long run which will be needed to develop electric vehicles in the future.


popular
The lineup for this week's Late Late Show has been revealed
QUIZ: Can you guess the pixellated movie posters?
QUIZ: Can you name all these European countries just from their vowels?
Met Éireann says there's a risk of snow for parts of Ireland this weekend
Man being treated for suspected case of coronavirus in Belfast
Everything Irish fans need to know ahead of the WWE Royal Rumble this Sunday
New Angela Scanlon show to fill Saturday night slot on RTÉ
You may also like
10 months ago
The 5 main benefits of driving a hybrid car
1 year ago
Toyota recalls more than 2.4 million cars over crash fault
1 year ago
Toyota Ireland is carrying out a voluntary recall of two of their models
1 year ago
Driving of electric cars expected to become mainstream in Ireland in the next 15 years
2 years ago
An app that will save lives on Irish roads and reward safe drivers has been launched
2 years ago
WATCH: Ryu drives a Toyota around instead of Hadouken-ing it to death
Next Page