10 reasons why Home Alone will always be a Christmas classic

An essential watch over Christmas.12

John Hughes' superb caper Home Alone is a must-watch during the Christmas season. Here are some of the reasons why...

1) The music, sets and production design.

END_OF_DOCUMENT_TOKEN_TO_BE_REPLACED

There's something so distinctively festive, and slightly ominous, about John Williams' music in the film because the use of chimes, Christmas bells and strings only adds to the festive feeling.

The soundtrack also features some cracking Christmas songs like Have Yourself a Merry Little Christmas, White Christmas and Run Rudolph Run.

Away from the music, if you look at the film again, you'll probably notice that there's rarely a frame of footage that doesn't contain the Christmassy colours of red and green. There's plenty of snow also, as if things weren't festive enough.

We all wanted to live in that house with its gigantic attic, cool laundry shoot and perfect treehouse...it even had a phone in it!

2) Uncle Frank is one of the greatest Christmas villains ever.

END_OF_DOCUMENT_TOKEN_TO_BE_REPLACED

Uncle Frank is just a reprehensible turd of a human being.

Look at the evidence; he doesn't let Kevin watch movies, he's too cheap to even pay for his own part of the pizza bill and he has the gall to call Kevin a "little jerk."

END_OF_DOCUMENT_TOKEN_TO_BE_REPLACED

Frank gets worse thought because he makes his wife an accomplice in a robbery, he steals the cutlery from the plane and hides it in her purse. To compound matters, Uncle Frank then rubs the McAllister's nose in it when they finally realise that they accidentally left Kevin at home.

Jeez, even The Grinch learned some compassion during Christmas. Not Uncle Frank.

If you're like me, you will probably be able to recite this sequence word-for-word.

Keep the change ya filthy animal.

It's unlikely that your brother is as annoying as Buzz, although we do admire the sheer levels of hatred that he delivers in some of his lines.

The fact that he deliberately ate Kevin's cheese-pizza, only to instantly barf it up, is really poor form.

Buzz isn't the only one who makes Kevin's life miserable though because the other members of his family are also rotten.

Throughout the film, Kevin is called all of the following; a disease, phlegm-wad, helpless and for those French speakers, les incompetents.

To make things worse for Kevin, he also has to sleep with Fuller, who didn't go easy on the Pepsi despite the rubber sheets being packed.

Christmas is the time of goodwill and you have to love those random acts of kindness that are shown in the film, especially by John Candy's Gus Polinski when he offers Kate McCallister a lift home to see her son.

One thing always never sat right with us though. How could she not have heard of the Polka King of the Midwest? I mean the Kenosha Kickers were huge in Cheboygan.

In a very violent and hilarious way, the film also teaches kids the importance of not judging a person by their appearance because Old Man Marley , or the South Bend Shovel Slayer as he is better known, actually turns out to be just a misunderstood soul.

Na, we're still convinced that he actually killed someone.

Old Man Marley scared the bejesus out of me when I was growing up.

6) Some of these timeless quotes.

"I made my family disappear."
"You're afraid of the dark, too, Marv."
"This is my house, I have to defend it."
"You guys give up yet? Or are you thirsty for more?"
"Why the hell are you dressed like a chicken?"

The two burglars could be the most unintentionally hilarious double act in film history. 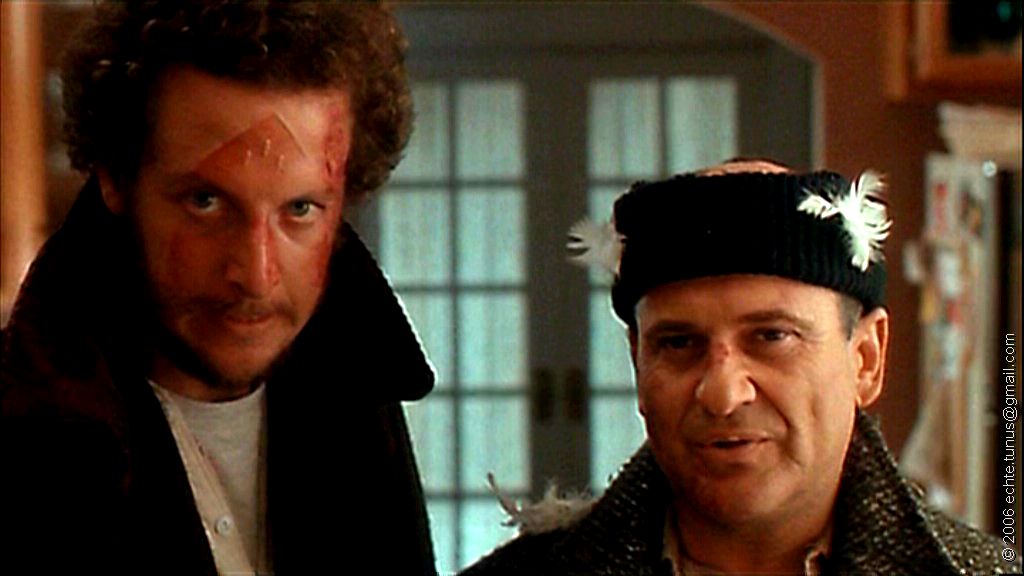 8) The greatest scream ever.

This moment will never stop being funny.

9) All the cool stuff that Kevin gets to do.

Let's be honest, apart from the obvious danger to his safety that's being posed by a couple of burglars, we all wanted to be Kevin in this film because he got to do some really cool stuff.

For example, Kevin was able to; set off some fireworks; use an air rifle, eat ice-cream for dinner, take his sled down the stairs and watch anything he wanted on TV.

What's not to love?