Wondering what to watch this weekend? Not to worry, as Netflix have added a few gems to their current catalogue.

With options including a Tom Hanks modern classic, the second season of a hit thriller series and a new sci-fi film drawing comparisons to Bird Box, below JOE has chosen its top Netflix picks this weekend.

END_OF_DOCUMENT_TOKEN_TO_BE_REPLACED

Assane's quest for revenge against Hubert Pelligrini has torn his family to pieces. With his back to the wall, he now has to think of a new plan, even if it means putting himself in danger.

Starring the charismatic as hell Omar Sy, Lupin is a retelling of the classic French story about world-famous gentleman thief and master of disguise Arsène Lupin. The first part of the mystery thriller show was watched by 70 million households during its first month, becoming the most-watched non-English series on Netflix.

After a sudden global event wipes out all electronics and takes away humankind’s ability to sleep, chaos quickly begins to consume the world.  Only Jill (Gina Rodriguez), an ex-soldier with a troubled past, may hold the key to a cure in the form of her own daughter.

The question is, can Jill safely deliver her daughter and save the world before she herself loses her mind.

END_OF_DOCUMENT_TOKEN_TO_BE_REPLACED

Extra crispy pork chops in Birmingham, deep-fried Oreos in San Diego, and jumbo lump crab cakes in Baltimore - is your mouth watering yet?

Daym Drops, the Grandfather of Food Reviews on YouTube with more than 250 million views, travels to find the best unknown fried dishes coming from the streets, fancy restaurants and home kitchens. 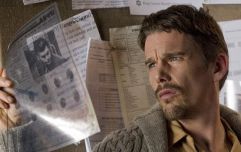 END_OF_DOCUMENT_TOKEN_TO_BE_REPLACED

Captain Phillips is a retelling of the 2009 hijacking of the US container ship Maersk Alabama by a crew of Somali pirates, with the film focusing on the Alabama’s commanding officer Captain Richard Phillips (two-time Oscar-winner Tom Hanks) and the Somali pirate captain Muse (Barkhad Abdi) who takes him hostage.

The two men are set on an unstoppable collision course when Muse and his crew target Phillips’ unarmed ship. In the ensuing standoff, both men will find themselves at the mercy of forces beyond their control.

In Sony Pictures Animation’s Wish Dragon, Din, a working-class college student with big dreams but small means, and Long, a cynical but all-powerful dragon capable of granting wishes, set off on a hilarious adventure through modern-day Shanghai in pursuit of Din's long-lost childhood friend, Lina.

Their journey forces them to answer some of life's biggest questions - because when you can wish for anything, you have to decide what really matters.

The Big Reviewski || JOE · TBR Spotlight: Loki - Episode Six - 'For All Time. Always.'
popular
Netflix has quietly added 12 great movies to their library today
The JOE Movie Quiz: Week 113
6 incredible outdoor experiences in Kildare you need to do this summer
10,000 people were vaccinated at walk-in centres yesterday
1,098 new cases of Covid-19 confirmed amid "ongoing heavy demand" at walk-in vaccine centres
QUIZ: Test your all round wisdom with this general knowledge quiz
The JOE Friday Pub Quiz: Week 254
You may also like
1 day ago
Bob Odenkirk reveals he suffered "a small heart attack" but says he will "be back soon"
1 day ago
One of the best war films of the last five years is among the movies on TV tonight
2 days ago
10 great new additions to Amazon Prime Video in August
2 days ago
WATCH: Lady Gaga is orchestrating a murder in the first trailer for House of Gucci
2 days ago
One of the best Westerns ever is among the movies on TV tonight
3 days ago
Michael Fry to star alongside big names from Game of Thrones and Derry Girls in TV adaptation of Graham Norton novel
Next Page