Set record because it's on TV later. Expect one hell of a showdown.

Having established an extremely high standard - as he always does - with the first two episodes of his new series Seven Worlds, One Planet, David Attenborough and his documentary team are now switching their focus to South America.

For 332 days, his crew documented the most species-rich continent on Earth. 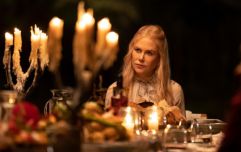 END_OF_DOCUMENT_TOKEN_TO_BE_REPLACED

From the volcanoes of the Andes to the world’s largest rainforest, the Amazon, viewers are about to get an extraordinary glimpse at some of the world's most incredible animals and ecosystems.

In terms of promotional footage, the BBC have shared this extraordinary clip that was captured in Patagonia. Take a look as a puma mother draws on a lifetime’s experience to catch prey three times her weight.

For those interested, Guanacos stand at two metres tall and weigh three times the amount of a female puma. Will this mother be able to provide a meal for her growing cubs?

From the rivers of Patagonia to the dry canyons of Brazil, South America has some of the most diverse wildlife on the planet.

The episode will also document some rarely seen Andean bears as they clamber thirty metres into the canopy to find elusive fruit.

Elsewhere, poison dart frogs use ingenious methods to keep their tadpoles safe, whilst anacondas stalk capuchin monkeys. At Igauzu, swifts make death-defying flights through one of the biggest waterfalls on Earth.

Here's another taste of what's in store when Seven Worlds, One Planet airs at 18:20 on BBC1.

The Big Reviewski || JOE · M. Night Shyamalan, Alex Wolff & Thomasin McKenzie talk about their new creepy thriller Old
popular
Netflix has quietly added 12 great movies to their library today
The JOE Movie Quiz: Week 113
QUIZ: Test your all round wisdom with this general knowledge quiz
The JOE Friday Pub Quiz: Week 254
10,000 people were vaccinated at walk-in centres yesterday
6 incredible outdoor experiences in Kildare you need to do this summer
One of the best Westerns ever is among the movies on TV tonight
You may also like
3 days ago
Michael Fry to star alongside big names from Game of Thrones and Derry Girls in TV adaptation of Graham Norton novel
4 days ago
Bob Odenkirk taken to hospital after collapsing on Better Call Saul set
5 days ago
MTV is looking for Irish people to take part in the new season of Catfish
6 days ago
The 10 must-watch new (and old) arrivals on Disney+ this August
6 days ago
Here are the three Irish contestants entering Casa Amor tonight
6 days ago
Chucky is back and as murderous as ever in the first trailer for his new TV series
Next Page