Dinosaurs. Heists. Old school romance. And the scariest movie of 2018.

As months at the cinema go, June is a banger.

To make sure you're up to date with all things cinema, subscribe to our movie show The Big Reviewski: 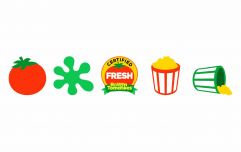 END_OF_DOCUMENT_TOKEN_TO_BE_REPLACED

Plot: A volcano is about to erupt on the island where Jurassic World was once operational, and only Chris Pratt and Bryce Dallas Howard can help save them from extinction all over again.

Go See It Because: After the huge success of Jurassic World finally showing us the park up and running (at least for a little while), Fallen Kingdom needs to be seen for blowing it all up again.

END_OF_DOCUMENT_TOKEN_TO_BE_REPLACED

Plot: A tightly-knit but highly dysfunctional family begins to unravel is some seriously terrifying ways following the funeral of a family member.

Go See It Because: Toni Collette and Gabriel Byrne headline what is being described as the "best horror since The Exorcist", and is in with a good shout of being the scariest movie of 2018.

Plot: Debbie - brother of Danny - Ocean has just been released from prison, and she immediately sets about organising a massive heist, involving robbing millions of dollar worth of diamonds at the Met Gala.

Plot: When her husband and child are killed in a bomb attack, a mother comes out the other side of her time of mourning with the lust for revenge.

Go See It Because: Diane Kruger gives the performance of a lifetime in this movie, which won the Golden Globe for Best Foreign Language Movie.

Plot: Based on a true story, a couple make the romantic decision to sail entirely across the Pacific Ocean together, but a rare super-hurricane throws them into the path of certain devastation.

Go See It Because: Shaileen Woodley (The Fault In Our Stars) and Sam Clafin (Me Before You) play the central couple to great effect, while the director of Everest impresses with some seriously scary storm scenes.

Plot: A young Dubliner has dreams of becoming a DJ, but his love of partying stops him from achieving his dreams. When he crosses paths with his long lost brother, he is forced to re-evaluate his entire life.

Go See It Because: Emmet Kirwan writes and stars in this fantastic Irish movie, which is every bit Ireland's answer to Trainspotting. Up there with Michael, Inside for best Irish film of the year so far.

Plot: When given the extra funding to bring the battle on the bad-guys south of the border, the shady government agent brings the heartless assassin back in from the cold, and promptly lets him off the leash.

Go See It Because: Benicio Del Toro and Josh Brolin return to the world of warring on drug cartels in Mexico, but this time the safety is off, and the action is through the roof.

popular
Amazon Prime Video has just added 38 very big movies to its library
Mia Khalifa claims seaside town is better than Miami
The 50 most iconic songs of all time* have been revealed
We just got the first trailer for a movie not out until 2024
The start of the superhero takeover of Hollywood is among the movies on TV tonight
21 jokes that are so bad they're actually brilliant (but still quite bad)
The Banshees Of Inisherin is arriving on Disney+ sooner than you might expect
You may also like
6 days ago
EXCLUSIVE: Elizabeth Banks on directing Cocaine Bear in Ireland
6 days ago
David Harbour reveals the one stunt that went hilariously wrong in Violent Night
1 week ago
5 must-watch movies coming to the cinema this December
2 weeks ago
Released 20 years ago today, this Bond movie changed its ending following the events of 9/11
3 weeks ago
Two Irish movies rank among 10 best reviewed movies of 2022
3 weeks ago
How The Mummy movies almost physically destroyed Brendan Fraser
Next Page