15 years ago, one of the greatest scenes of the 21st century arrived in cinemas

The scene is the centrepiece of what is arguably the saddest movie of the 21st century.

Based on the acclaimed novel of the same name by Ian McEwan, the romantic war drama begins in the 1930s and centres around the wealthy Tallis family and their housekeeper's son Robbie (James McAvoy).

END_OF_DOCUMENT_TOKEN_TO_BE_REPLACED

As it starts, Robbie and the older sister of the Tallis clan, Cecilia (Keira Knightley), have romantic feelings for each other but have not acted on them due to the rigid class structure of the time.

However, on the one night that they confess their love for one another, the couple is cruelly torn apart.

This is on account of a series of misunderstandings, involving Cecilia's younger sister Briony (Saoirse Ronan, in an Oscar-nominated breakthrough role), a sexually explicit note and a horrendous crime, which lead to Robbie being wrongly imprisoned.

Four years later, he is released from jail on the condition that he joins the British army and fights in World War II.

END_OF_DOCUMENT_TOKEN_TO_BE_REPLACED

There is no doubt that it would be incredibly devastating to be unfairly separated from the person you've spent years longing after just as they have admitted to feeling the same way. That said, it's during the war section of Atonement that proceedings go from bad to worse for Robbie.

This is encapsulated in the movie's jaw-dropping, over five-minute long, single unbroken tracking shot in which we witness a wounded Robbie and his comrades (played by Daniel Mays and Nonso Anozie) stumble through Dunkirk beach in an effort to be evacuated.

END_OF_DOCUMENT_TOKEN_TO_BE_REPLACED

Essentially the moment in which viewers see Cecilia and Robbie's tragic love story colliding with history, the scene truly feels like hell on earth, particularly given how much of the preceding movie was spent on the luxurious Tallis estate.

During the long shot, we see horses being executed point blank and thousands of miserable soldiers - many of which are injured or suffering from shellshock - wandering through the thick mud caked in dirt, just wanting to go home.

But amongst all this, and the many men taking to getting blackout drunk to escape their current circumstances, there is an absolutely gorgeous moment of soldiers coming together at a bandstand to sing a hymn.

The entire sequence is the only part of Atonement that is spent on the famous Dunkirk beach. Yet, in one shot, it conveys to audiences the scale and horror of the real-life event, as well as the people trying to persevere through it.

So, how was the scene accomplished? Well, the movie's cinematographer Seamus McGarvey (who would later go on to work on The Avengers, 2014's Godzilla and Nocturnal Animals) has shed light on this.

In a great video interview with Cooke Optics, the Northern Irish DOP admitted that he is "not a great fan" of long shots, finding that they can often be distracting in movies, and that the scene was not imagined as such in the Atonement screenplay.

"Initially in the script, it read as a number of scenelets. Once we scouted the location, we realised that for light, for tide, for all sorts of reasons, it would be impossible to shoot this over three days and separate all the scenes," McGarvey recounted.

However, when director Joe Wright came up with the idea for the long shot, the cinematographer was not happy.

"I was like: 'We've been so specific about the shots and the storyboarding of this film.' Why do something that I felt at the time was slightly indulgent, perhaps? And Joe sat down and said: 'No, you're wrong. This is why I want this'." McGarvey said.

"He wanted this scene of Robbie's perspective oscillating between objectivity and subjectivity. Using the camera as an observer and then kind of entering into a more hallucinogenic almost dreamscape, so it was almost passing through him and out again."

The shot took weeks of preparation, during which McGarvey and Wright set up a model of the beach - using it to determine what would be in the scene and how the camera would move.

"I worked out the various positions that [camera operator Peter Robertson] would either be free walking with the camera or on a milk float that he could step on and off of and then later on there was a rickshaw that carried him the last part of the way," he explained.

"It was a big challenge to plan that out. It was almost like a centipede on overtime trying to get the shot to work, with the help of the operator, the focus puller, the grips - everybody working in synthesis.

"The hero of the shot really is Peter Robertson, the operator. It's not just the stamina required. It's really the intellectual rigour of knowing to hit your marks." 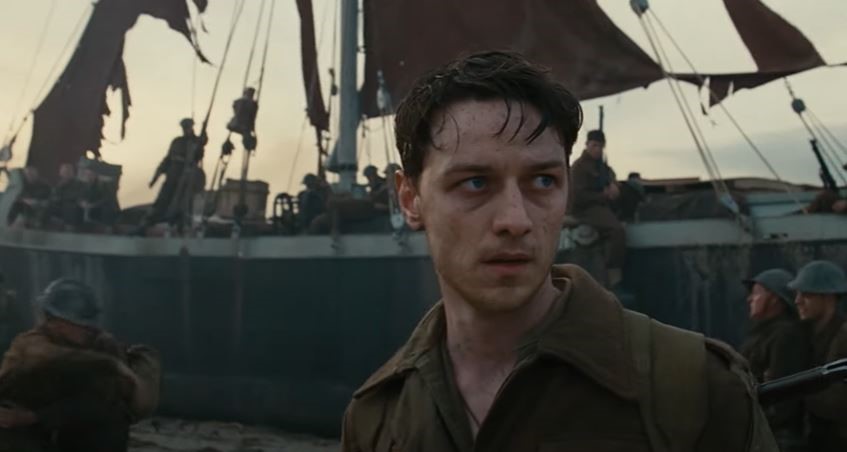 Due to the cost of setting up the shot and the thousands of extras, McGarvey and Wright only had a few chances to get in on camera, with the first two attempts not working.

"The first two weren't great for various reasons, just the dynamics of the shot, the way the extras were, the light was too bright," the cinematographer recalled.

"And then the third time, the light was beautiful. It went behind a cloud and there was this lovely silky softness to the image that I loved."

Shooting on film, Wright was unable to see if the shot came out right and wanted to do it a fourth time.

However, by this point, the light had gotten so bad that the attempt was abandoned halfway through.

"It was with absolute terror that we waited for the dailies (the raw, unedited footage shot) to come back," McGarvey said.

"I'll never forget the exhilaration of watching the dailies and thinking: "Wow, it's there.'"

And according to McGarvey, the shot required no additional lighting. Also, aside from some minor tweaks, everything viewers witness in the scene was present when it was filmed.

"Everything's in camera. The extra hanging off the Ferris wheel. Was that CG? No, it was all in camera."

James McAvoy has voiced his love of the Dunkirk sequence in interviews, saying that McGarvey and Robertson deserved Oscars for their work.

However, 2007 was a packed year for the movies and while Atonement was nominated for the best cinematography award, it lost to There Will Be Blood.

That said, 15 years after its release, Atonement - and in particular, its Dunkirk scene - remains a classic.

popular
Conor Mcgregor hit by car ‘at full speed’ while cycling
Colin Farrell shouldn't win the Oscar this year
Parents left in shock after gorillas start mating in front of kids at zoo
S Club 7's Hannah Spearritt and children left homeless after being forced from home before Christmas
All of the new Netflix movies and shows arriving in February
Couple left mortified after best man delivers incredible punchline during speech
Netflix has just added one of the best sci-fi movies of recent years
You may also like
1 hour ago
Can you get top marks in this ultimate Oscars 2023 quiz?
2 days ago
Barry Keoghan mentioned in UK Parliament speech during government debate
2 days ago
BBC apologises after calling Paul Mescal 'British' in Oscar coverage
2 days ago
Netflix defends Squid Game reality show as three people receive medical treatment
3 days ago
A very funny horror comedy is among the movies on TV tonight
3 days ago
Here's the line-up for this week's Late Late Show, which will include an Irish Oscars tribute
Next Page