"It's close to midnight, something evil's lurkin' in the dark..."

Kirsty Wark, the normally reserved journalist and BBC presenter, last night celebrated the Halloween edition of Newsnight in her very own spook-tacular way.

As she wrapped up the broadcast, which normally deals with scaring the pants off petrified politicians, dry ice began to roll across the studio floor, a graveyard appeared in the background and the iconic Michael Jackson music kicked in. A troupe of blood-splattered Zombies swarmed the stony-faced Wark, who subsequently joined in and nailed the now infamous ‘Thriller’ dance.

Presumably the backing dancers were simply told to "Wark this way." 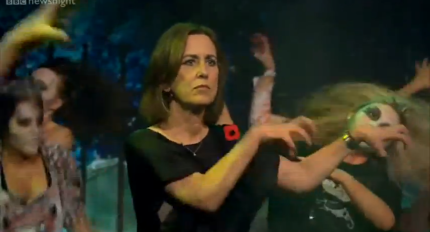 END_OF_DOCUMENT_TOKEN_TO_BE_REPLACED

The BBC production also went down The Simpsons Treehouse Of Horror route as the show’s editor Ian Katz was re-christened Ian 'Batz' in the closing credits.

And here's MJ showing us how it's really done:

popular
The 50 most iconic songs of all time* have been revealed
Seth Rogen has "no plans" to work with James Franco again after sexual misconduct allegations
QUIZ: Can you get top marks in this quick general knowledge quiz?
WhatsApp to punish users unless they agree to new privacy changes in coming weeks
PICS: The man with the biggest penis in the world has one unbelievable problem with it
The JOE Movie Quiz: Week 101
People think they've figured out the ranking of the viewers on your Instagram Stories
You may also like
1 week ago
QUIZ: How well do you know Ted Hastings' one-liners from Line of Duty?
1 week ago
Each Line of Duty copper ranked by their likelihood of being H
1 week ago
Netflix’s new true crime documentary could be your next TV obsession
2 weeks ago
The Ultimate Oscars Quiz
2 weeks ago
The full list of all the new shows and movies coming to Netflix in May
2 weeks ago
Morrissey calls The Simpsons "racist" after showing him with his "belly hanging out"
Next Page