We answer the biggest question of our generation: Which is the best Chris?

Four Chrises enter. Only one Chris leaves (with the title of Best Chris).

END_OF_DOCUMENT_TOKEN_TO_BE_REPLACED

No, this is just down to the four Big Hollywood Chrises, and it starts of with us having a look at the highs and, well, more highs of each of the lads to date, and before you ask, we're just going to go in alphabetical order, starting with...

Biggest Box Office: Well now... this is tough. Technically, his biggest movie has been Avengers: Infinity War with over $2 billion at the box office. But if we're talking movies he alone headlined, then it would have to be Captain America: The Winter Soldier with $714 million. However, if we're talking movies that weren't comic book movies, then we fall all the way down to (the really quite fantastic) Snowpiercer with just $87 million.

Best Reviewed Movie: That also goes to Snowpiercer, with 95% on Rotten Tomatoes.

Hunk Out Of Ten: Ten.

JOE's Interview Highlight: He talks about touching his boob in all of his movies.

END_OF_DOCUMENT_TOKEN_TO_BE_REPLACED

Biggest Box Office: Again, it would be Avengers: Infinity War. Outside of that, it would be Thor: Ragnarok ($854 million), and outside of the comic book world, it is Snow White & The Huntsman ($397 million).

Best Reviewed Movie: Star Trek with 94% (which he was barely in), followed by Thor: Ragnarok with 92%.

Hunk Out Of Ten: One. Just kidding! Ten.

Biggest Box Office: If we're talking just plain facts, it would be Wonder Woman with $821 million. Outside of that, there were the Star Trek series, as well as co-lead hits like Unstoppable or Thir Means War. In terms of his biggest hit as the obvious lead actor, it would be Jack Ryan: Shadow Recruit with $136 million.

Biggest Box Office: Yep, another Infinity War alumnus. Then there was Guardians Of The Galaxy and the Jurassic World movies, neither of which could claim Pratt to be the biggest reason people went to see them. Same goes for The LEGO Movie, and the only thing left over is his co-lead with Jennifer Lawrence sci-fi thriller Passengers ($303 million), because he has been the lead in literally nothing else.

Best Reviewed Movie: We already mentioned it had very little to do with him, but that title goes to The LEGO Movie with 96%.

Hunk Out Of Ten: Ten.

JOE's Interview Highlight: His look at pure confusion when he hears about Ireland having a dolphin...

So... how does all of this break-down?

In terms of JOE interview highlights.... OH, WE CAN'T CHOOSE!

Yep, this is a toughie, which is why we turned to you, loyal readers, and you answered in your droves! So here it is, this is who you reckoned the best Chris was... 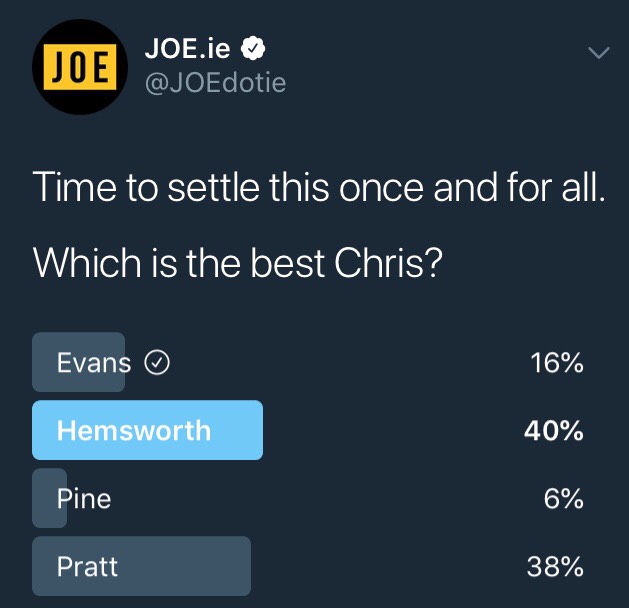 Well. There you have it.

popular
Amazon Prime Video has just added 37 big movies to its library
Welder awarded €15,000 for unfair dismissal despite admitting to drinking alcohol before work
10 years ago today, the scariest movie ever made (according to science) was released
County where winning Lotto jackpot ticket worth nearly €9 million was sold confirmed
Dublin Bus and boat involved in city centre collision
Here's the line-up for this week's episode of The Late Late Show
Netflix has just quietly added 30 big movies to its library
You may also like
18 hours ago
Netflix's new BIG scary show & 13 more new movies and shows to watch this weekend
1 day ago
A powerful Tom Hardy performance is among the movies on TV tonight
1 day ago
Alec Baldwin reaches settlement with family of Rust filmmaker Halyna Hutchins
1 day ago
Time to get scared – the full line-up for 2022's Horrorthon has been unleashed
1 day ago
Amazon Prime Video has just added 37 big movies to its library
1 day ago
Kelsey Grammer to play Frasier once again in new sequel series
Next Page