Bill Maher is a well-known American comedian who has a late-night television show on HBO entitled Real Time with Bill Maher.

He is often praised for his brutal honesty, while also attracting some criticism for being perceived as insensitive at times. 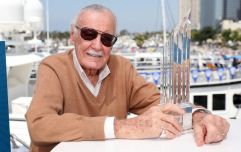 END_OF_DOCUMENT_TOKEN_TO_BE_REPLACED

The bio for the blog reads: "The guy who created Spider-Man and the Hulk has died, and America is in mourning. Deep, deep morning for a man who inspired millions to, I don’t know, watch a movie, I guess."

"Now, I have nothing against comic books – I read them now and then when I was a kid and I was all out of Hardy Boys. But the assumption everyone had back then, both the adults and the kids, was that comics were for kids, and when you grew up you moved on to big-boy books without the pictures."

Maher's comments has gathered quite a great deal of negative attention online for the way he spoke about Lee's craft so soon after his death last week.

popular
Netflix has just added an incredibly tense 97-minute thriller
A great underseen action thriller is among the movies on TV tonight
The JOE Friday Pub Quiz: Week 307
An exciting Irish crime thriller is among the movies on TV tonight
Prime Video has just added 25 very big movies to its library
The 50 most iconic songs of all time* have been revealed
Thunderstorms and heavy rain to end Ireland's current heatwave
You may also like
3 years ago
Stan Lee's former manager charged with elder abuse
3 years ago
Bill Maher unleashes another rant against Marvel and Stan Lee fans
3 years ago
Netflix have added a pretty great Easter Egg in honour of Stan Lee
3 years ago
Sky are launching a channel this weekend to celebrate the work of Stan Lee
3 years ago
Newspaper gets Stan Lee's name wrong in front page tribute
3 years ago
Stan Lee's Avengers 4 cameo has already been filmed
Next Page