Blue Planet II introduced everyone to a new underwater nightmare

This week's episode focused on life at a coral reef, and essentially became Finding Nemo made real.

But no, it came down to that nasty Bobbit fish, which hung around just under the bottom of the reef, hiding just out of sight, waiting for some unsuspecting victim to wander by... 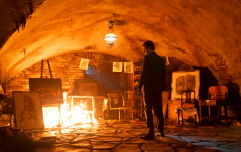 END_OF_DOCUMENT_TOKEN_TO_BE_REPLACED

... and then BAM! Like something out of a slasher movie, the Bobbit would pop out and devour the victim in one chomp, and that was that.

Everyone watching had the exact same reaction, one that had the neighbours severely worried about their well-being...

jumped harder at the bobbit than i do in horror movies bloody hell david was right when he said it pays to remember there’s a bobbit about #BluePlanet2 ?

Me every Sunday between 8-9pm watching Blue Planet 2 #BluePlanet2 pic.twitter.com/3MAK0R8jfL

Metre long bobbit worms?! How have I not heard about these creepy terrors of the ocean before?! #blueplanet2 pic.twitter.com/VQWDGyY72l

When the Bobbit goes in for the kill on the bream and you jump off the settee in fright and scare the cat ?? #BluePlanet2

popular
Amazon Prime Video has just added 37 big movies to its library
10 years ago today, the scariest movie ever made (according to science) was released
Welder awarded €15,000 for unfair dismissal despite admitting to drinking alcohol before work
County where winning Lotto jackpot ticket worth nearly €9 million was sold confirmed
Here's the line-up for this week's episode of The Late Late Show
Netflix has just quietly added 30 big movies to its library
It took five long weeks, but The Rings Of Power is finally fantastic
You may also like
8 months ago
WATCH: PlayStation reveals 10-minute gameplay trailer for its incredibly creepy new horror game
11 months ago
10 scary games you can play right now (without having to actually buy them)
1 year ago
The cast of the new Candyman reveal their favourite scary movies
1 year ago
The six scariest scenes in the MCU so far
3 years ago
WATCH: First look at the Are You Afraid Of The Dark? reboot has arrived
3 years ago
I don't believe in ghosts. But there is a ghost in my house
Next Page