Despite the hype surrounding A Star Is Born...

Bradley Cooper's 2018 remake of the classic Hollywood film only picked up one award at this week's Golden Globe Awards — for best original song. It failed to pick up any gongs in the overall, acting or directing categories.

But Cooper will be feeling a bit better today, after seeing the BAFTA nominations. The British Academy of Film and Television Arts nominated Cooper in the best film, actor, best director, adapted screenplay and original music categories — meaning he has a chance to win separate awards for acting, directing, writing and composing, as well as Best Film. It's the first time anyone has been nominated in all five categories since the inception of the BAFTAs 72 years ago. 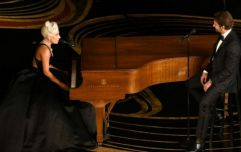 END_OF_DOCUMENT_TOKEN_TO_BE_REPLACED

It was also a very good day for Alfonso Cuarón, who picked up six individual nominations for Netflix's Roma, for best film, foreign-language film, director, cinematography, editing and original screenplay.

Similarly, The Favourite picked up 12 nominations, including another Best Actress nomination for Olivia Coleman, as well as Best Supporting nominations for Emma Stone and Rachel Weisz.

The BAFTAs will take place on 10 February.

The Big Reviewski || JOE · The Big Reviewski with Y: The Last Man, that Malignant ending & a secret streaming service
popular
Irish pubs and nightclubs could be given 6am closing time after 22 October reopening
Here's the line-up for this week's episode of The Late Late Show
What can you actually do if someone tries to pay you with a bucket of coins?
Simon Harris is absolutely not having any of these leak accusations
Marc MacSharry sticks the boot into Micheál Martin on his way out the door
QUIZ: Can you get 15 out of 15 in this tricky science quiz?
The 50 most iconic songs of all time* have been revealed
You may also like
2 years ago
Here is the full list of 2019 Oscar winners
2 years ago
There was quite a reaction to Lady Gaga and Bradley Cooper’s ‘Shallow’ Oscars performance
2 years ago
WATCH: Bradley Cooper joins Lady Gaga on stage in Vegas for live performance of 'Shallow'
2 years ago
A Star Is Born proves that Irish audiences, whether they'll admit it or not, absolutely love musicals
2 years ago
EXCLUSIVE: Bradley Cooper tells us what inspired the most magic moment of A Star Is Born
2 years ago
EXCLUSIVE: Bradley Cooper reveals what it would take for him to direct Guardians Of The Galaxy 3
Next Page