The bromance between The Young Offenders, Billy Murphy, and Robert Sheehan is very real

"You start to feel scared when you act with him!" The Christmas Special airs tonight.

There are some characters that start off being out-and-out villains but then, a strange thing happens. These antagonists become so beloved by fans that they turn into something completely different.

For example, Bob Kelso in Scrubs was originally a cantankerous and mean-spirited foil for Doctor Cox. By the time that show ended, there was a mutual respect between both characters and Kelso usually got the funniest lines. In The Simpsons, Sideshow Bob is a fully-fledged maniac that tries to kill Bart on numerous occasions, and yet, Kelsey Grammar’s character is usually the best thing in those episodes.

On this note, fans of The Young Offenders have developed a wonderfully odd relationship with the man that continuously torments Conor and Jock, Billy Murphy.

Violent, unhinged, and a bit of a nut-job, there’s still a hidden layer to Leeside’s most famous thug and as we all saw in the season finale when he hijacked the bus, the ‘I’m Billy Murphy’ quote has become a beloved catchphrase.

Hell, even the Gardai are having the craic with him - played brilliantly by Shane Casey - and for fans of The Young Offenders, the Christmas Special sees Billy in a new light.

On screen, he's busy stealing phones and smacking people, but away from the cameras, it turns out that Conor and Jock, aka the very talented duo of Alex Murphy and Chris Walley, are very close friends with the unlikeliest hero in The Young Offenders.

Fake Billy or Real Billy? Young Offenders actor Shane Casey was detained briefly by Garda Walsh & O'Neill at Ballinlough Summer Festival last weekend. 'After All' that, the Gardaí settled for a selfie and set him free.#YoungOffenders #Ballinlough #CommunityPolicing pic.twitter.com/ou7SNAc03k

END_OF_DOCUMENT_TOKEN_TO_BE_REPLACED

Without giving too much away, the Christmas Special sees Billy Murphy taking up a new job as a movie starring Robert Sheehan starts filming in Cork.

Given the fact that Conor and Jock are always up to mischief, their paths cross with everyone’s favourite psychopath and a few digs are thrown.

"We just had to tell Shane a few times that it’s not a real punch and he’s like ‘No bother boy!,” said Murphy jokingly.

Walley adds: "Shane is brilliant though. He is such a great actor to act across from because he really gives you a lot to work with. Like, you don’t really know what’s going to come next from him. Any reaction you see is always very genuine with him because he’s always trying to throw you as many curveballs as possible and you start to feel scared when you act with him!”

Of course, whenever Conor, Jock and Billy get together, carnage usually follows and the Christmas Special is no different.

"He’s a tortured soul and Shane (Casey) plays him so well. Between takes, you would be chatting away to him and he’s dead normal and then all of a sudden, Peter (director) would say action and all of a sudden, his eyes change and he becomes this manic human but we all love him!,” said Walley.

Murphy is very much of the opinion that the character of Billy Murphy is the wildcard that makes The Young Offenders so popular.

“The character of Billy is so erratic and you’ve no idea what his movements are, they're so wild. You don’t know what comes next from him. He’s great,” said Murphy. 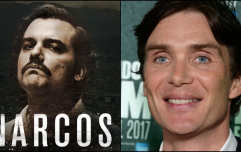 END_OF_DOCUMENT_TOKEN_TO_BE_REPLACED

This being said, the award-winning show garnered a new level of attention when it was announced that Love/Hate and Misfits star Robert Sheehan would be joining the cast.

Rather than approach the material with a degree of nervousness or trepidation, Sheehan jumped at the chance to get to grips with The Young Offenders' unique style of comedy. After watching the episode, you'll know just how willing the Laois man was to take the mickey out of himself.

"He was great. When you get an opportunity to play yourself and to be an absolute prick, jump on it," said Walley jokingly.

In fact, it turns out that Sheehan went above and beyond what was asked of him during his brief time on the show.

"We were all wondering how it might go because when Peter wrote the part, he was like ‘Now Rob, you don’t have to do all of this stuff. You can tell me what you like and what you don’t like’ but he was like ‘No. I want to do it all!’ He was well up for it and willing to do anything. He threw himself in there and even stayed behind to chat with loads of the extras," said Murphy.

Given the fact that The Young Offenders Christmas Special is one of the most eagerly anticipated TV events of the holiday period, we know that plenty of people will be tuned in with it airs at 23:15 on BBC1 on 23 December and on Christmas Day at 22:35 on RTÉ1.

You can have a listen to JOE's interview with Chris Walley and Alex Murphy below.


popular
Met Éireann issues status yellow rainfall warning for nine counties
QUIZ: How many of these Recess characters can you name?
Two Irish citizens have tested positive for the coronavirus
The 50 most iconic songs of all time* have been revealed
Hozier soundtracks the excellent new trailer for Netflix’s latest original series, Marco Polo
QUIZ: How well do you know these famous Ted Hastings quotes from Line of Duty?
QUIZ: How well do you know the Matrix series?
You may also like
1 day ago
First images from Season 6 of Line of Duty suggests a new character is already commanding AC-12’s attention
2 days ago
Narcos creator discusses the possibility of Narcos: Ireland
2 days ago
BBC will show an 'immensely powerful' documentary about The Troubles tonight
2 days ago
Narcos creator discusses his exciting plans for the show's future, if a new season is made
3 days ago
Derry Girls star perfectly explains the brilliance of Tommy Tiernan's chatshow and why it works so well
3 days ago
Narcos writer explains the significance of those intriguing cameos in the new season
Next Page