#TRAILERCHEST: We’re not sure if we’re supposed to be this scared of the Cats trailer

We're not quite sure what to make of this just yet.

Cats is one of Andrew Lloyd Webber’s biggest and best musicals, but as Jersey Boys should have taught us, not every stage classic need to make the switch to the big screen. 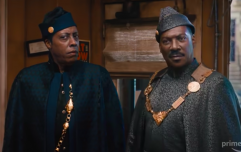 END_OF_DOCUMENT_TOKEN_TO_BE_REPLACED

That being said, with the man who directed Les Mis behind the camera, and an extremely star-studded cast, this could be the next big musical to deliver.

The plot is both a simple and well-known one - a tribe of cats must decide yearly which one will ascend to the Heaviside Layer and come back to a new life.

The trailer debuted at this year’s Cinema Con, with the team behind it using a brand new “digital fur technology to create the most perfect covering of fur.”

If we're being perfectly honest, and we mean no disrespect to the hours of effort that undoubtedly went into developing this technology, it's just a little bit terrifying if you ask us.

Maybe that's just us though...

Naturally, the trailer is getting the meme treatment online, but we’ll be good and just show you the trailer instead:

House of Rugby Ireland · Ireland's feel-good win, Casey's initiation song, scrapping Sexton and Scott Williams interview
popular
The 50 most iconic songs of all time* have been revealed
Eoghan McDermott to leave RTÉ after six years (Report)
Someone in Ireland is €500,000 richer following Tuesday's EuroMillions draw
EA Sports bans Irish FIFA player who racially abused Ian Wright for life
People think they've figured out the ranking of the viewers on your Instagram Stories
PICS: The man with the biggest penis in the world has one unbelievable problem with it
The JOE Friday Pub Quiz: Week 232
You may also like
14 hours ago
The hero of last year's Toy Show features in this week's Late Late Show lineup
18 hours ago
Golden Globe Best Picture-winner Nomadland heading straight to Disney+ in Ireland
19 hours ago
BBC reveals Season 6 of Line of Duty is coming later this month
1 day ago
WATCH: Michael B. Jordan leads Jack Ryan spin-off Without Remorse
1 day ago
Here are the best movies on TV this evening
1 day ago
Robbie Williams to be played by CGI monkey in biopic based on his life
Next Page