While promoting their latest cinematic release, We’re The Millers, Jennifer Aniston and Jason Sudeikis had an interview to remember with Soccer AM’s Tubes.

Or an interview to forget, depending on which way you look at it.

After repeatedly slapping himself in the face, moaning incomprehensibly, and then proclaiming his love for the former Friends star, Tubes eventually gets round to asking his sole question, “what three things would you take back to the States from England?” 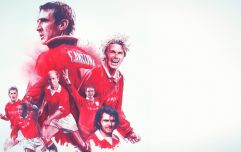 END_OF_DOCUMENT_TOKEN_TO_BE_REPLACED

The highlight though is around the 2.39 mark, when the Soccer AM resident poet goes into full on sexual innuendo mode with his two interviewees.

To be fair to the two stars, they handle the entire experience perfectly, with Tottenham Hotspur coach Sudeikis especially up for the craic. At least they weren’t absolute bast*rds like Bruce Willis was to one poor interviewer recently.

It’s safe to say though that Tubes probably won’t be asked back to future Jennifer Aniston press junkets any time soon but, in the meantime, enjoy the man in all his creepy glory:

The Big Reviewski || JOE · The Big Reviewski with Andy Serkis, Squid Game follow-ups & the return of Succession
popular
Brian Laundrie: 'Strong probability' remains found belong to missing fiance
QUIZ: Can you name all the countries beginning with L?
How to lower your cholesterol - 5 really handy tips
WATCH: Micheál Martin and Danny Healy-Rae had an almighty row in the Dáil
The cast of Succession on the most ridiculously expensive scene in the show
Here's the lineup for this week's Late Late Show
Socially distanced queues at bar counters expected to be allowed under new guidelines
You may also like
1 week ago
The JOE Friday Pub Quiz: Week 264
1 month ago
Manchester City's Benjamin Mendy charged with four counts of rape
2 months ago
Michael Ballack’s son Emilio, 18, dies in 'quad-bike crash’
3 months ago
Basketball Ireland Chief apologises for social media post following controversial England penalty in Euro 2021 semi-final
4 months ago
Christian Eriksen shares first update from hospital as he undergoes tests after cardiac arrest
4 months ago
Christian Eriksen stable but may not play football again, says sport cardiologist
Next Page