The Gang Head To Ireland?

Colin Farrell appearing on It's Always Sunny In Philadelphia makes a huge amount of sense, if you think about.

He has appeared for an episode of Scrubs before, so he's obviously got a love for the sit-com. 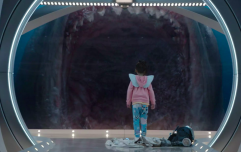 END_OF_DOCUMENT_TOKEN_TO_BE_REPLACED

He was also incredibly funny in the likes of The Lobster, In Bruges, The Killing Of A Sacred Deer, and Horrible Bosses, so we know he can do dark comedy well.

Plus, the gang in It's Always Sunny are running Paddy's Pub, an Irish bar! The stars are aligning here, folks!

Recently we were lucky enough to catch up with Colin about his part in the new Disney movie Dumbo (our review here), so obviously we had to ask, since he was spending some screen time with Danny DeVito, did he ask him to appear on the show at all?

Check out the rest of our interview with Colin Farrell here, where he chats about working with Tim Burton, what movies are guaranteed to make him cry, and showing his young son IT at too young an age...

Meanwhile, Dumbo is in Irish cinemas right now, and you can book your tickets to go see it right here.

popular
The JOE Movie Quiz: Week 173
QUIZ: Only the brightest will conquer this tricky General Knowledge Quiz
The JOE Friday Pub Quiz: Week 314
QUIZ: How well do you remember Avatar?
One of the most ridiculous blockbusters of recent years is among the movies on TV tonight
The JOE Music Quiz: Week 123
Jeffrey Dahmer’s dad thinks he knows what’s to blame for son becoming a serial killer
You may also like
15 hours ago
QUIZ: How well do you know The Mighty Ducks?
17 hours ago
The JOE Movie Quiz: Week 173
1 day ago
Potential 007 actors have to nail this one Bond scene in the audition
1 day ago
An incredible Western crime drama is among the movies on TV tonight
1 day ago
Netflix unveils first look at Irish animated movie that could be an Oscar contender
2 days ago
A superhero double bill is among the movies on TV tonight
Next Page