WATCH: Danny DeVito reveals exactly what he loves about It's Always Sunny

Danny DeVito has had an excellent career.

Danny DeVito stars alongside Colin Farrell, Eva Green and Michael Keaton in the new live-action Dumbo film, and we're very excited for it.

It's a classic story, has a top-notch cast, and come on, we'll go and see anything with Danny DeVito in it. 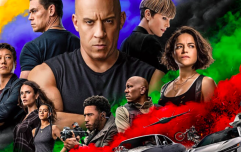 END_OF_DOCUMENT_TOKEN_TO_BE_REPLACED

And although he has had some iconic roles throughout his lengthy career, right now we associate with him with one character and one character only - Frank Reynolds.

DeVito joined the cast of It's Always Sunny in Philadelphia during its second season, and the show hasn't looked back since.

Now in its 13th year, the show continues to go from strength to strength, although its most recent season did divide opinions among some fans.

Speaking about the show to Jimmy Kimmel on Monday night, he praised his co-stars, while Kimmel himself described it as "one of the funniest shows ever".

He said: "Sunny is 13 now. I'm just having so much fun with it. The people - Rob, Charlie, Glenn and Kaitlin - they're amazing to work with. It's been a lot of fun.

"And they get sicker and sicker every year, and I love it!"

Take a look at the interview in full here:

Dumbo will be released in Irish cinemas on 29 March of this year.

popular
The 50 most iconic songs of all time* have been revealed
Seth Rogen has "no plans" to work with James Franco again after sexual misconduct allegations
WhatsApp to punish users unless they agree to new privacy changes in coming weeks
Minister for Housing invested €30,000 into real estate investment fund
QUIZ: Can you get top marks in this quick general knowledge quiz?
People think they've figured out the ranking of the viewers on your Instagram Stories
RSA confirm online theory tests to come into effect later this month
You may also like
12 hours ago
Zack Snyder on using The Cranberries' song 'Zombie' in his new movie Army Of The Dead
16 hours ago
TG4's new true crime series about murders around Ireland looks unmissable
1 day ago
Who killed Erin in Mare of Easttown? We list the suspects from least to most likely
1 day ago
The JOE Movie Quiz: Week 101
2 days ago
Here are the best movies on TV this evening
2 days ago
The first look at Lily James as Pamela Anderson for new series has been revealed
Next Page