Brought to you by Break Out Pictures

END_OF_DOCUMENT_TOKEN_TO_BE_REPLACED

Brand-new Irish movie Dark Lies the Island is set in small rural village called Dromord (yes it's a palindrome) where everything is owned by the one family. From the outside it seems quaint, but bubbling underneath the surface are sex, violence, dark memories, murderous intentions, jealousy, guilt and betrayal.

To celebrate we've set out the things you only hear in a rural village, including some unique phrases to study before you get to see it in cinemas from 18 October. 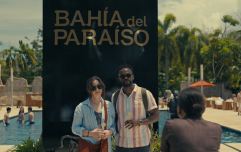 END_OF_DOCUMENT_TOKEN_TO_BE_REPLACED

The original. The go-to.

This is the basis of many a conversation with shopkeepers, chippers and bus drivers. It can be applied to anything from a scorching Saturday in June to, if you're gas craic, a wild Wednesday in December (this must include a hint of sarcasm).

"Great day for the parish"

Noticing a trend here? Describing what kind of day it is will always get a good conversation going.

A great day for the parish could be anything from an Under-8's hurling blitz to a cake sale in the school hall. Once there's someone setting up a table with luke-warm cans of soft drink and squashed chocolate bars, you're in for a treat.

You didn't notice the glaring mistake in that last paragraph, did you?

Don't you dare ever call them soft drinks...

"His father would've made County if he kept at it"

Imagine the standard of the All-Ireland if the players of every GAA club up and down the country had lived up to their reputation. Somewhere at this very moment, the most talented footballer that ever lived is probably regaling the town with stories of how much better he is than the current squad.

It's a tragedy really.

"He wasn't setting the world on fire"

Pretty much the exact opposite of what we just spoke about. This is a lad who hasn't exactly been living up to his expectations, or just couldn't be bothered to even try.

The type of lad that if there was work going in the bed, he'd sleep on the floor.

This can also be applied to drying your clothes, but we decided to opt for towns blessed with decent bogs. There's no finer place to get a tan than up in the bog on a summer's day, and no better place than the very same for a "hang sangich" and a flask of tae.

To the untrained eye, this probably doesn't even look like a complete sentence. That's where you're wrong.

This is the ultimate way to end a conversation that isn't really going anywhere, but you don't want to seem rude. It's always open to interpretation, but at the same time everyone knows exactly what you mean.

"Did you hear they're building 275 houses up that road?"

Gone are the days when the directions to your house were "turn right at the church, drive straight for five minutes and we're the third house down."

The times are a-changing, and for some reason that narrow laneway beside your house has now gotten planning permission for a miniature city. Madness.

General release tickets are on sale now, and it'll be out in cinemas on Friday, 18 October.

Dark Lies the Island is in cinemas from 18 October, book your tickets now #darklies

Brought to you by Break Out Pictures

popular
People want "offensive" Crown Paints advert banned after attracting hundreds of complaints
QUIZ: Can you identify the famous song from the opening line?
Here's how to make €9-11 on Revolut in just a few minutes
Man arrested on suspicion of the murder of Irish man in London
New car-free town with population of 85,000 set to be built in Dublin
Galway City Council street cleaners claim Lotto jackpot worth over €5.5 million
Elderly Irish man stabbed to death on mobility scooter in London
You may also like
23 hours ago
COMPETITION: Do your bit to end gum litter for good and WIN a €150 One4All voucher
1 day ago
COMPETITION: Here's how you can WIN €500 off your young driver car insurance with Allianz
1 day ago
McDonald's are running some very tasty deals this month, here's what you need to know...
6 days ago
Don't miss this temporary pop-up night club, coming to Dublin for one night only!
1 week ago
COMPETITION: Want to WIN a €1,500 holiday? Share your homemade burger snaps to WIN
1 week ago
Planning your next adventure? Here are 7 Irish attractions you need to visit this summer
Next Page