Titled Exploring Northern Ireland with Siobhán McSweeney, the four-episode show will see the actress visit places in the north like Strangford Lough, the Mourne Mountains, the Fermanagh Lakelands, the Sperrins, and the Causeway Coast. 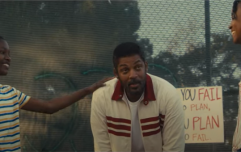 END_OF_DOCUMENT_TOKEN_TO_BE_REPLACED

This is while she learns more about these rural landscapes, historic homes and the people who live and work there.

McSweeney, who is originally from Cork, is best known for playing the eye-rolling and sarcastic Sister Michael in Derry Girls, but had never actually set foot in Northern Ireland before filming the hit comedy.

A statement from Channel 4 reads: "After falling in love with the landscape she now wants to explore more of the lakes, mountains, coastline and forests for a new four-part series for More 4 from Belfast-based Waddell Media."

The series is supported by Tourism Ireland and Tourism Northern Ireland.

Speaking about the show, McSweeney added: “If the last year has taught me anything it’s that life’s too short to sit indoors.

"As a keen walker, I’ll be lacing up my walking boots to spend some much-needed time hiking, kayaking and wild camping in this wonderful corner of the world.”