He also tells a very funny story about an odd injury he got on the set of the movie.

There was a time in the nineties and the early noughties when it felt like every second movie was a Quentin Tarantino clone. This wasn't necessarily a bad thing, mind you, but not everyone has the natural talents of Tarantino.

We have had a bit of a break since all of Hollywood decided to copy-and-paste his work with varying results, but one current director who might have the chops to properly emulate the Tarantino vibe is Joe Carnahan.

END_OF_DOCUMENT_TOKEN_TO_BE_REPLACED

He grabbed our attention back in 2002 thanks to the gritty crime thriller Narc, and ever since then he's made a series of tough-as-nails movies (Smokin' Aces, The Grey, The A-Team, Stretch, Boss Level), and his latest movie Copshop continues down that path.

The movie stars Frank Grillo as a man who is arrested by a local police officer (Alexis Louder), only to find himself locked up with a hitman (Gerard Butler) who has been assigned to kill him.

JOE was lucky enough to get the Irish exclusive interview with both Gerard Butler and Alexis Louder in the run-up to the release, and we asked about the big influences they might have taken while making this movie.

Butler told us: "Yeah, I would say anything Tarantino or Guy Ritchie for this. But, then again, we're making our own thing here. It has elements and a taste of all of those movies. But I really felt like we were making our own beast, so therefore we could just take it in our own direction.

"And not spending too much time taking inspiration from other things, because we didn't want it to feel like it was a copy or a rip-off of any of those things."

Alexis Louder talks about using a lot of Clint Eastwood for the inspiration of her character in the movie, and you check out the full interview with them both right here:

END_OF_DOCUMENT_TOKEN_TO_BE_REPLACED

We also had to ask about particular scenes in Copshop which (no spoilers!) involve them both sitting down for long periods of time. Is that fun? Or is it kind of boring? And particularly for Butler, who spends his sitting down scenes with his arm handcuffed above his head?

Butler laughed: "Yeah, I've still got shoulder problems from that!"

"Don't forget to tell him about the butt pads," Louder tells him.

"I know I needed a foam [butt pad] to sit on for my [scenes]," Louder tells us, "because you're sitting on concrete. But when you have scenes like that, where you're stuck sitting down, the energy on the inside is 'I want to be standing up, I don't want to be confined to this', and I think that is what brings the energy into what we're saying and what we're trying to get from each other." 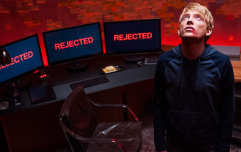 END_OF_DOCUMENT_TOKEN_TO_BE_REPLACED

"Yeah, I dunno," Butler jokes. "I think for my character, he was kinda like 'Yeah, I'm cool here until I don't have to be here anymore'."

Butler raised his arm above his head, mimicking his actions in the movie, before continuing: "'I'm just biding my time. Waiting. For the opportunity. To kill.'"

He suddenly grabs his shoulder, laughing "Oh, there it goes. I've got that twinge in my shoulder again!"