WATCH: The first trailer for the third Fifty Shades of Grey film is here

"None of this meant anything before you."

It has received over 2 million views in just under 12 hours since it was released on Monday morning. 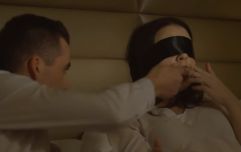 VIDEO: This Irish couple's Fifty Shades of Tae spoof has been nominated for a major award

END_OF_DOCUMENT_TOKEN_TO_BE_REPLACED

The start of the trailer shows Dakota Johnson's character, Anastasia Steele, in a wedding dress. She seems to have finally acquired the dream life that she thought about living with Jamie Dornan's character, Christian Grey, but despite the luxurious beaches and private jets, the trailer implies that something bad is in store for the pair.

The fifty-second teaser barely gives away any more than that and it has left people in a whirlwind on Twitter who cannot wait until February to find out the plot of the film.

The last film in the series is set to be released on Valentines Day 2018.

The Big Reviewski || JOE · The Big Reviewski with Y: The Last Man, that Malignant ending & a secret streaming service
popular
Larry Bass resigns from RTÉ board just one day after first board meeting
Cork City Centre described as a "no go area" after man pulled from wheelchair in violent attack
Aer Lingus announces flight sale as US to lift travel ban for vaccinated EU passengers
The first ever foldable hotel room has been launched in Ireland
Nearly 100 domestic abuse incidents reported to Gardaí every day this year
The weather for the week ahead looks very autumnal indeed
WATCH: Margaret Thatcher was briefly resurrected at the Emmy Awards
You may also like
4 years ago
Everyone is talking about this pic of Jamie Dornan for one very obvious reason
6 years ago
Video: Fifty Shades of Grey gets the hilarious Honest Trailer treatment
6 years ago
Fifty Shades of Grey smashed some Irish box office records over the weekend
6 years ago
This kinky Irish DIY shop has the best 50 Shades of Grey promotion that you'll see
6 years ago
Video: This Fifty Shades of Steve Buscemi mock-up trailer is fantastic
6 years ago
Video: 50 Shades of Grey in a strong Cork accent is a very different thing altogether (NSFW)
Next Page