Ron Leibman, known for playing Dr. Leonard Green in Friends, has died at the age of 82.

While the actor is well-known for multiple roles, younger generations will certainly know him best for his recurring role as Rachel's father in the sitcom Friends. 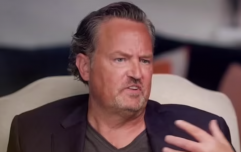 Matthew Perry says he spent $9million trying to get sober

END_OF_DOCUMENT_TOKEN_TO_BE_REPLACED

He won an Emmy award back in 1979 for his role in Kaz, a legal series which he created.

He also played famous New York lawyer and Donald Trump mentor Roy Cohn in Angels in America, winning a Tony Award for the stage production of the play.

Other credits include Norma Rae and Garden State.

The BBC reported that Leibman's agent confirmed he had died of pneumonia.

popular
The "eighth best movie ever made" is among the movies on TV tonight
Mia Khalifa claims seaside town is better than Miami
Jennifer Lawrence sparks controversy by saying she was the first woman to lead an action movie
Met Éireann updates weather warning for entire country as temperatures set to fall to -6
One of the best films of all time is among the movies on TV tonight
The 50 most iconic songs of all time* have been revealed
QUIZ: JOE’s Big News Of The Day Quiz #27
You may also like
2 days ago
Matthew Perry can't rewatch any of Friends for heartbreaking reason
2 months ago
QUIZ: Test your knowledge with this Ultimate Friends Character Quiz
5 months ago
Friends co-creator says she's now "embarrassed" by the series' lack of diversity
6 months ago
QUIZ: Name the TV show from the end credits production logo
7 months ago
Friends actor Mike Hagerty dies aged 67
8 months ago
Broadway and Vegas show Friends! The Musical Parody announces full Irish tour
Next Page