An indication of the extremely caring man that he was.

A little bit of magic has left the world as the news of Gene Wilder's sad passing begins to register. The actor who was best known for his starring role in Willy Wonka & the Chocolate Factory and various iconic comedies like Blazing Saddles, Stir Crazy and See No Evil, Hear No Evil has passed away after a long battle with Alzheimer’s disease.

In a statement that was released by his family, the two time Oscar nominee decided to keep his illness a secret because he didn't want to disappoint any any children who, in the event that they met him, might have to hear that Willy Wonka himself was ill.

Here's the touching statement in full along with various tributes that have been paid to the gifted actor. 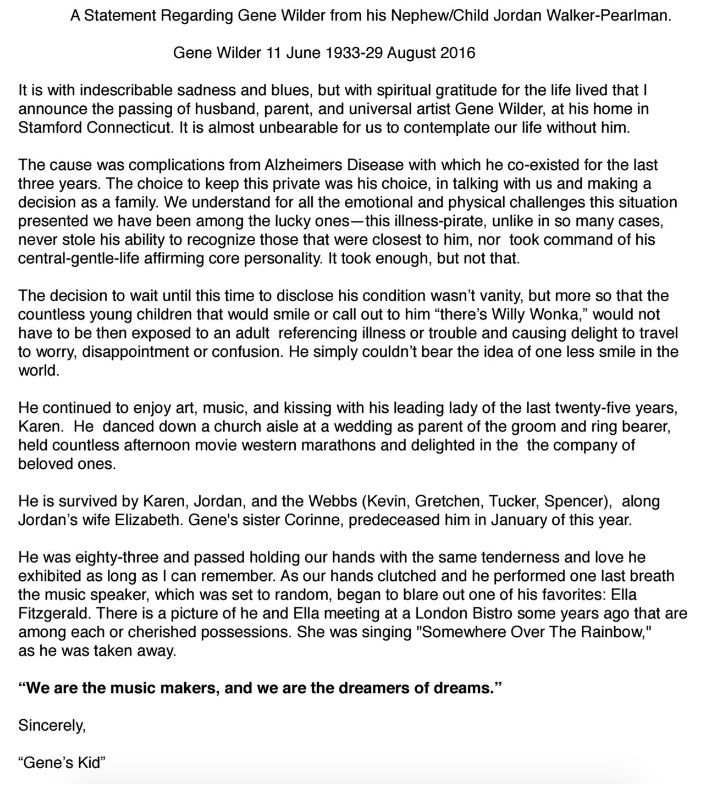 Here are some of the people that have been deeply moved by Wilder's incredible legacy and talent. RIP.

Gene Wilder-One of the truly great talents of our time. He blessed every film we did with his magic & he blessed me with his friendship.

It was a true honor to talk to Gene Wilder. He was an unusually brilliant and sweet comic artist. https://t.co/YGcqUt8vUL

Gene Wilder was one of the funniest and sweetest energies ever to take a human form. If there's a heaven he has a Golden Ticket. ;^)

Gene Wilder. Best ever at what he did. #RIP

#GeneWilder Au revoir to a gifted actor whose films I suggest you re-visit if you want to be thoroughly entertained. pic.twitter.com/FgcO4OVkYg

I saw Blazing Saddles 7 times at the cinema with my school friends . George St. Cows outside.
Gene Wilder you were a genius. Rest in Peace.