The new changes will be seen in this week's episode.

Virgin Media has confirmed a number of changes to the cast of Gogglebox Ireland in preparation for the incoming Covid restrictions to impact production.​

Over the final two episodes of the season, there will still be a catch up of the week's telly from all cast members who live together but not from those cast members that visit each other’s homes to take part. 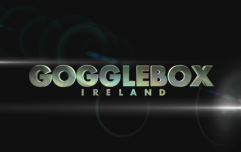 END_OF_DOCUMENT_TOKEN_TO_BE_REPLACED

The creators of the show confirmed that the effects will begin to be seen from this week with less of The Cabra Girls and none of David and John.

The following week’s final episode of the new series will proceed without Barbara and Janet in Donegal, Tracie and Anita in The Liberties, Cavan boys The Tully twins and a reduced line up from The Cabra Girls of just Gráinne and Ashley, while the new Lucan family will be represented by just Gary and Lariche.

Commenting on the new changes, Series Producer of Gogglebox Ireland, David Noble said: “It’s such a shame that we have to tweak the cast so close to the end of the series.

"They will be greatly missed but we are delighted that this show can be kept on the road for two more weeks and more than confident that our remaining cast will deliver the usual hour of midweek joy that is Gogglebox Ireland”.

popular
Netflix has just added an incredibly tense 97-minute thriller
18 counties hit with weather warning as temperatures set to reach 29 degrees
Nearly 100 flights delayed at Dublin Airport on Monday
GSOC investigating road crash in Monaghan that left multiple people injured
QUIZ: Can you get top marks in this short but tricky Irish geography quiz?
QUIZ: Can you name all the counties in Ireland without the letter 'E'?
WhatsApp introduces way to choose who can and can't see you're online
You may also like
11 months ago
A brand new household will make its Gogglebox Ireland debut tonight
11 months ago
Gogglebox star Andy Michael dies aged 61
11 months ago
Gogglebox star Mary Cook dies aged 92
1 year ago
Line Of Duty cast join Celebrity Gogglebox for Stand Up To Cancer
1 year ago
Gogglebox is looking for Irish people abroad for its Christmas special
3 years ago
Westlife are on Celebrity Gogglebox this week
Next Page