No Late Late this week, so here's your Graham Norton line-up

On the red couch tonight...

With no Late Late Show to vie for your attention this evening (Friday 14 June), Graham Norton has your eyes and ears all to himself.

As ever, it's a star-studded affair. 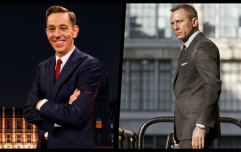 END_OF_DOCUMENT_TOKEN_TO_BE_REPLACED

Madonna, fresh from protesting about Israel's occupation of Palestine while simultaneously performing at the Eurovision Song Contest in Israel and presumably charging for her services, will hit up the BBC studio for a chat.

She'll be joined by Ian McKellen, he of Lord of the Rings, X-Men, and being best mates with Patrick Stewart fame.

He'll be plugging his new career-spanning 80-date solo show in honour of his 80th birthday.

Elsewhere, Oscar-winning director Danny Boyle teams up with Himesh Patel and Lily James, stars of his new movie Yesterday, which posits a strange alternate future in which one man and one man only remembers the work of The Beatles and passes it off as his own.

Speaking of music, Sheryl Crow, who is responsible for one of the better James Bond theme songs going, will be on hand to perform her latest single.

The Big Reviewski || JOE · The Big Reviewski with Ray Liotta, Goodfellas facts & Tom Hanks making us cry
popular
National minimum wage in Ireland to be increased in the coming year
One of the most-anticipated movies of the last few years is finally available to watch at home this week
QUIZ: Can you name the flavour of crisps just from the packet?
Revolut finally rolls out feature which allows users access wages before payday in Ireland
Taoiseach says he would like to see Garth Brooks play in Cork next year
Frontline workers could receive bonus payments or time off for efforts during pandemic
The iconic Busarás station in Dublin is set for a major facelift
You may also like
2 weeks ago
Samantha Mumba and Paul O'Connell to lead Friday's Late Late Show lineup
2 weeks ago
Applications are now open for this year's Late Late Toy Show
2 weeks ago
"You have a murderer still living in Ireland" - Sophie Toscan du Plantier's son makes fresh appeal for information
3 weeks ago
Donie O'Sullivan, The Script and Ireland's Olympic heroes among guests on The Late Late Show this Friday
3 months ago
The Late Late Show audience is returning - but only for vaccinated people
3 months ago
Adam King receives letter and space flag gifts from US President Joe Biden
Next Page