There's plenty of reasons for you to tune into The Graham Norton Show this week and foremost among them is the presence of Derry Girls star Siobhan McSweeney. You may recognise her for her portrayal of Sister Michael on the hit Channel 4 comedy.

She'll be on to talk about her new role, presenting The Great Pottery Throw Down. 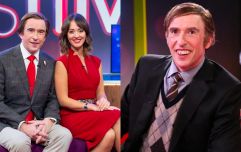 END_OF_DOCUMENT_TOKEN_TO_BE_REPLACED

There'll also be something for fans of Bridgerton as star Regé-Jean Page will also be on the couch, or chairs with all the social distancing these days.

Page plays Simon Bassett, the Duke of Hastings, and has been one of the most popular stars of the show.

Dave Grohl must be doing the rounds these days as he'll be appearing on both The Late Late Show and Graham Norton Show tonight.

He'll be on via Zoom to promote the latest Foo Fighters album, Medicine at Midnight, which is about to be released in Ireland.

Felicity Kendal will be on to talk about her musical theatre debut in, Anything Goes.

There'll also be a musical number from Jessie Ware, who performs her new single 'Remember Where You Are'.

The Graham Norton Show airs Fridays at 10.45pm on BBC One.

popular
Female personal trainer shares the creepy messages she receives from men on social media
The cast and director of Fast & Furious 9 discuss setting a sequel in Ireland
You can now get a life-size inflatable pub for your back garden
What Netflix’s Seaspiracy gets wrong about fishing, according to a marine biologist
Dublin cyclist says he "could've died" after being pushed into ditch
The 50 most iconic songs of all time* have been revealed
New walk-in Covid-19 test centres open across Ireland
You may also like
1 day ago
Steven Avery's lawyer says nephew Bobby Dassey planted evidence in case
2 days ago
Reeling in the Years was watched by over half a million people last night
3 days ago
Reeling in the Years: How the 2010s are different to any other decade
1 week ago
87% of RTÉ staff reject proposals for salary cuts as part of cost-saving measures
1 week ago
WATCH: Teaser trailer for Picard Season 2 hints the return of a major villain
1 week ago
Here's the lineup for this week's episode of The Late Late Show
Next Page