EXCLUSIVE: Jason Momoa on working in wet jeans and being mistaken for a drag queen in Belfast

He also chats about the Game Of Thrones wrap party, and his favourite places to drink in Ireland.

Following in the footsteps of Henry Cavill, Ben Affleck, and Gal Gadot, the next DC character to get their own standalone movie will be the incredibly powerful Aquaman, played by Jason Momoa.

Having already popped up briefly in Batman V Superman, as well as in a long stint fighting evil in Justice League, Momoa is now front and centre, fighting to overthrow his power-hungry half-brother (played by Patrick Wilson) with the help of a long-lost acquaintance (played by Amber Heard). 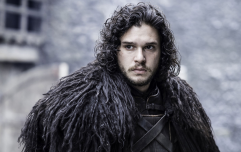 END_OF_DOCUMENT_TOKEN_TO_BE_REPLACED

JOE was lucky enough to sit down with Momoa in the lead-up to the release of Aquaman, and we chatted about everything from the movie's most painful stunt, to working in wet jeans, as well as the GOT wrap party and drinking non-alcoholic Guinness on the set of the new blockbuster.

Aquaman is released in Irish cinemas from Wednesday 12 December.

You can check those all out on the JOE YouTube channel, and you can watch the final trailer for Aquaman right here:

popular
Met Éireann issues weather warning for three counties
An underrated Jason Statham thriller is among the movies on TV tonight
QUIZ: Can you conquer this delightfully difficult General Knowledge Quiz?
QUIZ: Take your very best shot in this tough General Knowledge Quiz
The 50 most iconic songs of all time* have been revealed
A feel-good comedy with a Springsteen soundtrack is among the movies on TV
QUIZ: Can you name all of these countries just from one of their cities?
You may also like
6 months ago
Game of Thrones Studio Tour will open in Ireland in February 2022
6 months ago
"It has a Beauty & The Beast aspect" - Kristofer Hivju on his role in The Witcher Season 2
7 months ago
WATCH: The first 15 minutes of George R.R. Martin's video game are going to blow your mind
7 months ago
Ed Sheeran says Game of Thrones cameo backlash ruined the experience for him
8 months ago
The 100 greatest TV shows of the 21st century have been revealed
8 months ago
WATCH: The first Game of Thrones prequel trailer promises fire and blood
Next Page