There is a strong argument to be made that Arnold Schwarzenegger is a comedic genius who just hasn't been fully understood in his own time.

When he works with the right director – John McTiernan for the rediscovered Last Action Hero, Paul Verhoeven for secretly funny Total Recall, Joel Schumacher for the obviously campy Batman & Robin – that comedic side of the world's most famous action star really shines.

END_OF_DOCUMENT_TOKEN_TO_BE_REPLACED

But when it came to Jingle All The Way, which arrived in cinemas 25 years ago this week, he was already fighting an uphill battle – considering the movie comes from the director of (deep breath, here comes a list of exclusively bad movies) Problem Child 2, The Flintstones, Snow Dogs, The Flintstones in Viva Rock Vegas, Are We There Yet? and The Spy Next Door.

So, it should come as no surprise that it landed with a bit of a thud in the run up to Christmas in 1997, scoring just 17% on Rotten Tomatoes and making just $130 million from an inexplicably hefty $75 million budget.

While it is unlikely to get a late-in-the-day reassessment like Last Action Hero did, for some families, Jingle All The Way is a Christmas staple, and it is clear that everyone involved is definitely trying to make a funny film: Phil Hartman, Sinbad, Jim Belushi, Rita Wilson, a pre-Phantom Menace Jake Lloyd and a pre-Anchorman Chris Parnell all do their best.

Plus you can't watch this clip and tell us that Arnie wasn't in on the joke...

But it was a long, winding road to get to here.

Producer Chris Columbus (who wrote Gremlins and directed Home Alone and the first two Harry Potter movies, so he knows Christmas movies quite well) was inspired to have a hand in the script when, a year earlier, he couldn't source a Buzz Lightyear toy off the back of the popularity of Toy Story.

END_OF_DOCUMENT_TOKEN_TO_BE_REPLACED

Columbus had just dropped out of the directing gig for the reboot of Planet Of The Apes, which was due to star Arnie in the lead role, who also dropped out due to the constant delays on that project, which was eventually picked up by Tim Burton and Mark Wahlberg).

The pair reunited on this vehicle, with Arnie attracted to the idea of playing an ordinary character for once. Just before this, Arnie played a pair of secret agents (True Lies and Eraser), and just after this, he was a supervillain (Batman & Robin) and literally fought the Devil (End of Days).

Columbus wanted Joe Pesci in the role of Myron, likely off the back of working together in Home Alone, but the role eventually went to Sinbad, apparently due to his similar physical stature to Arnie himself.

Filming went by mostly without a hitch, except for the fact that the climactic holiday parade took three full weeks to shoot, and it was done in Los Angeles in the height of the summer.

1,500 extras lined the summery streets, decked out in winter clothes, fake snow all around. Plus, Daniel Riordan - the actor who plays Turbo Man in the movie - was terrified of heights, and as you'll likely remember, the climax involves Turbo Man flying around the parade in a jet pack. 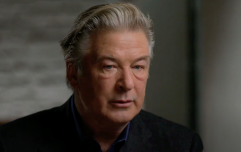 END_OF_DOCUMENT_TOKEN_TO_BE_REPLACED

Riordan would later say he was "not thrilled" about the whole process.

Not thrilled seems like a pretty apt description for most viewers of the movie, too. But at least it looks like Arnie was having fun.

Should you want to, Jingle All The Way is available to watch on NOW right now.

popular
One of Keanu Reeves' best movies has just been added to Netflix
CONFIRMED: Nightclubs to close, 50% capacity at indoor events and household mixing limit among new restrictions
The JOE Friday Pub Quiz: Week 272
The 50 most iconic songs of all time* have been revealed
QUIZ: Name the country for each of these non-capital cities
Pandemic Unemployment Payment to reopen for workers impacted by new restrictions
Here's the lineup for tonight's Graham Norton Show
You may also like
1 day ago
One of Keanu Reeves' best movies has just been added to Netflix
1 day ago
The movie described as "Showgirls in a convent" has a tentative Irish release date
1 day ago
One of the best films of the '70s is among the movies on TV tonight
1 day ago
Six must-watch movies coming to Irish cinemas this December
1 day ago
A who's who of Irish music pay tribute to the late Mic Christopher in new documentary on his life
1 day ago
One of 2021's most overlooked movies and 7 more movies and shows to watch this week
Next Page