He already tackled Cruise in My Scientology Movie.

Louis Theroux returns to our screens in early November with Louis Theroux’s Altered States - a series of three new films shot in America, investigating the worlds of adoption, polyamory and assisted suicide.

JOE was lucky enough to attend an advanced screening of the first film in the trilogy, 'Love Without Limits', and we’re happy to say it is very, very good. To be honest, Louis Theroux doesn’t really make bad films, but even then, this is a particularly great one, effortlessly switching from an emotional examination of the effects of living in an unorthodox relationship, to some vintage Weird Weekends style comedy when Louis attends a ‘Sensual Eating’ class. 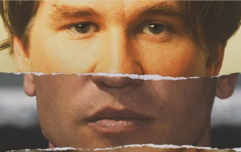 END_OF_DOCUMENT_TOKEN_TO_BE_REPLACED

The screening was followed by a post-film Q and A, where Theroux was asked what he might like to do next. His response was that he’d like to go back to doing some more programmes about well-known figures.

"I would like to get back to doing some celebrities profiling,” said Theroux, “reinventing the When Loius Met… [series]".

And who would be his dream subject? He replied with a very lofty target.

END_OF_DOCUMENT_TOKEN_TO_BE_REPLACED

"If it was a dream list, it would probably be Tom Cruise," Theroux replied.

"I was thinking about this. You’d have to get full access to him in his Scientology mode. You would want to follow him when he’s with David Miscavige, the head of Scientology.

"You know, he’s now got a little apartment in Clearwater, Florida. Him doing his superpower training, Scientology drills, it would be amazing."

And while we agree, that it would be a fascinating film, it is highly unlikely to happen. Cruise doesn’t give many interviews, and the Church of Scientology doesn’t exactly welcome in journalists.

A brilliant, under-seen Graham Taylor documentary is on TV tonight

END_OF_DOCUMENT_TOKEN_TO_BE_REPLACED

Louis Theroux of course already made a film on the controversial sect though, in 2015’s My Scientology Movie. His only theatrical film, it saw him recruit actors to play Cruise and Miscavige in recreations of stories from those who have left the Church.

popular
Amazon Prime Video has just quietly added 15 big movies to its library
QUIZ: Can you guess the pixelated album cover?
An unforgettable sci-fi film is among the movies on TV tonight
Gardaí issue update on investigation into murder of Sophie Toscan du Plantier
Travis Barker rushed to hospital after tweeting "God save me"
Irish man dies following hit-and-run in London
007 producers provide new update on Bond 26
You may also like
8 months ago
WATCH: Peter Jackson's much-anticipated Beatles documentary looks like a treasure trove
8 months ago
Virgin Media Player launches dedicated true crime content hub for viewers
9 months ago
Seven must-see 9/11 movies and documentaries to watch right now
10 months ago
New documentary will lift the lid on OnlyFans scene in Ireland
10 months ago
Five football documentaries to watch to kill time before the new Premier League season
1 year ago
A BBC documentary on the Peru Two is coming next month
Next Page