The documentary returns this week.

On 31 October, 2005,  a 25-year-old photographer named Teresa Halbach had an appointment with Steven Avery to take pictures of his sister's van for Auto Trader Magazine.

END_OF_DOCUMENT_TOKEN_TO_BE_REPLACED

Between 11-15 November, local authorities in Manitowoc County announced that they found Teresa’s car key in Avery's bedroom, burned remains in Avery's burn pit and blood in Teresa’s car. Avery was charged with Teresa’s murder and the mutilation of a corpse.

Those are the facts of the case.

For anyone unfamiliar with the events of Making A Murderer, this timeline details every major event that unfolded in the seminal crime documentary but despite the various allegations and theories that develop in the Netflix series, one irrefutable and tragic fact remains; a 25-year-old woman was brutally murdered.

These aren’t just stories – they are real people’s lives.

The huge demand for true crime documentaries and stories in recent years can be traced back to the December 2015 release of Making A Murderer.

Nothing, not The Staircase, not Evil Genius, not The Keepers, comes close to directors Moira Demos' and Laura Ricciardi's masterwork.

END_OF_DOCUMENT_TOKEN_TO_BE_REPLACED

Demos and Ricciardi are driven solely by the story and their search for truth.

It's encouraging to see that in Making A Murderer: Part Two, the filmmakers continue to give strong ethical consideration to the impact that the show has had on the family and friends of Teresa Halbach.

JOE spoke to Demos and Ricciardi to find out how they managed to maintain the dignity of their work - and Teresa's story - in the face of the average Netflix subscriber's thirst for pure entertainment.

In the very first scene of Part Two, the documentarians demonstrate an articulate and compassionate duty of care to Halbach's memory by reminding viewers that while the show is immersive, addictive, entertaining, binge-worthy etc, there's no escaping the fact that a young woman was killed.

"You're absolutely right, it was a conscious decision to remind people of the seriousness of that straight away," Demos tells JOE. 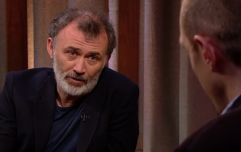 END_OF_DOCUMENT_TOKEN_TO_BE_REPLACED

"This story involves a tragedy that unfolds all the way around and that's something we take very seriously. In Part Two, as in Part One, we cast a very wide net and we invited the Halbach family themselves to participate. Once again, in Part Two, they declined which is a decision we understand and more importantly, it's a decision that we respect," she adds.

As viewers will see for themselves, one of Halbach's college friends does speak with the filmmakers in Part Two and those scenes add an extra layer of empathy and power to the feature.

Demos adds: "Of course, we'd love to hear from them directly about how they're feeling and about Teresa but we do respect their decision.

"We were incredibly grateful that one of Teresa's college friends, Chris Mara, did agree to sit down with us. Not just that but he sat down and gave us a very thoughtful interview - something that we could use in several of the episodes. It gave us a window into how he was feeling, how his friends were feeling and he also shared archival materials with us. This meant we could include Teresa then because she and her family are sort vicarious victims of this situation. They're also a major piece of this story."

In many ways, Part Two of Making A Murderer is shaped by a sense of duty that the directors felt towards portraying Halbach's life, and not just concentrating on her death.

Ricciardi adds, "What we heard - both directly and through archival material - is that people from Teresa's life wanted to remember her life, not just how she died. They wanted to celebrate her life and so in addition to sitting down with Chris Mara, we also tried to utilise local media, interviews that the press did with people who knew Teresa, and those that were expressing empathy for the family and empathy about the fact that the story wasn't over. Empathy also towards Steve and Brendan and the fact that we are challenging their convictions and that the family would be pulled back into the system."

Aside from the superb editing, direction and decision to release the entire series all at once, a large reason why Making A Murderer became so popular with viewers was the simple fact that the world - for the most part - were completely unaware of Steven Avery and Brendan Dassey's legal cases.

Compare that with now.

Every single person has become engrossed by their cases and the intricacies of them. Aside from dominating discussion, Avery's case also made it as far as the White House during the presidency of Barack Obama. That's how big this story is.

To their immense credit, Ricciardi and Demos deal with this 'pop-culture bubble' right from the very start of Part Two.

"We try to be pretty upfront because when we set out to start filming in Part Two, it became very clear to us that the world we were going back to document was a new world," said Demos.

She adds: "It was a new world precisely because of Part One. As storytellers, we're very interested in creating context to understand events. So, it was important to us to put the launch of the series and the response to the series right there in the open of the first episode. That's the context in which Part Two takes place. Beyond that, the methods we employ, our approach is very similar to Part One."

Fans will get to see how the case unfolds when Making A Murderer: Part Two is released on Netflix on 19 October.

popular
The JOE Friday Pub Quiz: Week 232
Body of third man found following murder of two men in Cork
Scarlett Moffatt discovers ‘30% rain’ on weather app doesn’t mean chance of rain
QUIZ: Can you correctly identify these European country flags?
All Direct Provision centres to close by 2024 and system to be replaced
These are the free subscription games coming to PlayStation and Xbox in March
Irish cinema named one of the 50 most beautiful cinemas in the world
You may also like
1 day ago
The full list of all the new shows and movies coming to Netflix in March
3 days ago
WATCH: Invincible looks like The Boys meets Rick & Morty
4 days ago
Derry Girls Season 3 to begin filming later this year
5 days ago
QUIZ: How well do you know The Walking Dead?
6 days ago
20 of the best war movies you can watch at home right now
1 week ago
Season 3 of Drive to Survive coming to Netflix next month
Next Page