Margot Robbie is one of the biggest actresses in the world at the moment following her breakthrough role in The Wolf of Wall Street and she's a popular choice for the potential female lead in a whole host of movies.

For her latest role in Tarzan, where she plays Jane, she was rather surprisingly asked to lose some weight for the role which would have meant implementing a strict diet according to WJLA. 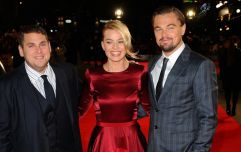 END_OF_DOCUMENT_TOKEN_TO_BE_REPLACED

However, Robbie refused to lose the weight because it would've meant that she couldn't go to the pub.

While she admitted that she defied the producers with the argument that women from the 19th century didn't need to be so toned, her real reasons were rather more selfish.

"I’m not going to look thin just for the sake of it. It was my first time living in London properly and I wanted to try every pub."

She wouldn't do it, because she wanted to try out every pub while living in London... we wonder if she ever plans on living in Ireland?

We didn't know it was possible, but we may like Margot Robbie a little bit more now...