The thing everyone forgets about The Matrix is how perfectly put together it is.

The plodding confusing sequels, along with The Animatrix, and the video games, and the comics, and pretty much everything that came after, were all just a mess. But go back and watch the original film. Don’t think about anything that followed it, just try to imagine it is 1999, and you have never seen anything like it. 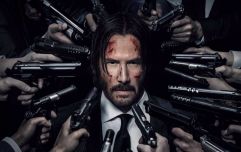 END_OF_DOCUMENT_TOKEN_TO_BE_REPLACED

The film unfolds so perfectly – the marketing campaign at the time deliberately did not say what ‘The Matrix’ itself actually was, so it plays like a genuine mystery. And then once we finally get up to speed – at the same time Neo does – it explodes into Hong Kong and anime-inspired action the likes of which Hollywood had never seen before.

Of course, now that bullet time has been ripped off so much, it does not seem as fresh – but the famous lobby sequence from The Matrix, where Keanu Reeves and Carrie Anne Moss have a massive shoot-out on the ground floor of Agent Smith’s building, remains one of the greatest action scenes of all time.

A big part of what makes it so exhilarating is the track playing over it – 'Spybreak!' by British 90s dance duo the Propellerheads. But a video shared on Reddit has removed the music, leaving just the sound effects.

END_OF_DOCUMENT_TOKEN_TO_BE_REPLACED

It totally changes the mood of the scene – yet it still completely works. The effect is more akin to Keanu Reeves’ *other* great action franchise, John Wick, with its clean, crisp, more grounded gunplay.

According to the YouTube uploader, the video was made by removing the surround channels from the audio file – so what we are hearing are the actual sound effects from the film, and it not like one of those videos where people put sound effects over music videos for comic effect.

It really makes you appreciate the sound design and the editing of the scene.

popular
Ireland could see more cost of living "challenges" if war in Ukraine continues, says Taoiseach
A fun '90s action flick is among the movies on TV tonight
QUIZ: Can you name whether all these Irish towns are west or east of the River Shannon?
Ticket prices for concerts set to rise due to inflation
Tax energy companies' profits to help with cost of living crisis, says think-tank
HSE establishes team to monitor monkeypox as virus cases more than double in UK
You may also like
5 months ago
One of Keanu Reeves' best movies has just been added to Netflix
7 months ago
Mel Gibson to star in John Wick prequel TV series
8 months ago
WATCH: The full trailer for The Matrix Resurrections is here to blow your socks off
8 months ago
QUIZ: How well do you remember the Matrix franchise?
10 months ago
The Ultimate Keanu Reeves Quiz
1 year ago
QUIZ: How old is Keanu Reeves in these photos?
Next Page