Were you watching? Probably...

Raidió Teilifís Éireann's annual report is out, and with that comes a "modest surplus" and a great deal of number-crunching.

We'll get to some of the big financial figures momentarily, but first let's honour the above headline and take a look at the most-watched TV programmes to air in Ireland throughout the year of 2021.

END_OF_DOCUMENT_TOKEN_TO_BE_REPLACED

In contrast, The GAA All-Ireland Football Final between Tyrone and Mayo was the second most-watched programme in Ireland, with 944,600 viewers accounted for.

The most-watched news programme of 2021, meanwhile, was the RTÉ Six One News broadcast on Tuesday, 5 January. On that day, the top stories included the Government potentially closing schools amidst a significant Covid-19 spike, the resultant pressure on hospitals, and the blocking of a Donegal fishing vessel by a Scottish patrol boat. 798,000 people watched that one.

On the beloved, never-problematic RTÉ Player, crime saga Kin was a big hit, commanding 2.47 million streams, with the very first episode of the series standing as the single most-streamed piece of content on the player at 515,600 plays. UEFA Euro 2020 – which took place in 2021, remember – recorded 2.5 million streams.

END_OF_DOCUMENT_TOKEN_TO_BE_REPLACED

In total, the player – which RTÉ Director-General Dee Forbes once said represents "fair value" when compared to the likes of Netflix – recorded 67 million streams in 2021.

Operating costs (excluding Special Events) increased by €10.3m compared to 2020 (€305.2 versus €315.5m) as content production resumed following severe pandemic-related disruption in 2020. The cost of special events in 2021, including EURO 2020, Olympics and World Cup qualifiers has been listed at €15.8m. 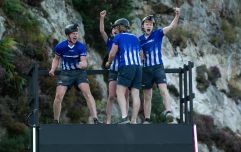 END_OF_DOCUMENT_TOKEN_TO_BE_REPLACED

On the ever-thorny subject of the TV licence fee –which the Government will not be eliminating any time soon  – RTÉ's Chief Financial Officer Richard Collins noted his "concern" regarding an increase in the number of Irish homes that do not have a traditional television set.

"This has been growing steadily over recent years, as per the Nielsen Establishment Survey, and is now 15.1% (January 2022), an increase of 2.2% in the past year," said Collins.

"As media consumption patterns become more complex, the television licence fee mechanism reflects less and less how people consume public-service content. It is for this reason that the mechanism is being changed in other countries to a media charge or other methods, rather than being device dependent."

popular
Parents left in shock after gorillas start mating in front of kids at zoo
Harvard study reveals how many times men should ejaculate each month to stay healthy
Close call as Paul McCartney tries to pose on Abbey Road crossing
Conor Mcgregor hit by car ‘at full speed’ while cycling
Colin Farrell shouldn't win the Oscar this year
The JOE Friday Pub Quiz: Week 331
Netflix has just added one of the best sci-fi movies of recent years
You may also like
2 days ago
No plans to abolish homework, says Minister Foley
3 days ago
This is what the cheapest house for sale in Dublin looks like
4 days ago
NTA publish €25bn plan for new Luas lines and Metrolink in Dublin
5 days ago
Three injured after fight breaks out at refugee centre in Dublin
5 days ago
Irish pizzeria given perfect score by top food reviewer
6 days ago
Elderly man killed in Cork hospital attack named
Next Page