With the sub-zero temperatures afoot and Gardaí advising us not to venture out, there's really nothing else for us tonight but to catch up on some telly.

Netflix is playing a blinder at the moment, and has released a huge amount of great TV for the baltic weekend that's in it.

The gangster drama is back, but this series is set two years after series two. It follows Tommy Shelby (Cillian Murphy) and his family as they go international.

Peter Capaldi stars as the Doctor for the second time running, with Jenna Coleman as his companion. Join them as they grapple with ghosts, vikings and of course, the Daleks.

This comedy-drama revolves around four friends, their relationships and their incomes, with Jennifer Aniston in the lead role.

This brand new, made-for-Netflix film tells the story of a man on the hunt for his father who accidentally ends up barricaded in an off-licence on Christmas Eve. 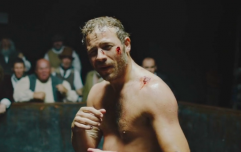 END_OF_DOCUMENT_TOKEN_TO_BE_REPLACED

With Britain heading into the swinging 60s, Queen Elizabeth must come to terms with huge changes in society and the public perception of the monarchy.

And finally Crazy Ex-Girlfriend and Riverdale are both also back with brand new episodes every week. It's almost like Netflix doesn't want us to go out...

Advertisement
House of Rugby Ireland · Quinn Roux on finding a home in Ireland and Mike McCarthy brings the absolute HEAT!
popular
Leo Varadkar says if Ireland introduced mandatory hotel quarantine, it would have to do so for a year
QUIZ: Can you name all of these countries just from one of their cities?
Man arrested for fishing envelopes out of church collection boxes in Cork
CONFIRMED: Level 5 restrictions to remain in place until 5 March
10 absolutely iconic video games that turn 20 years old in 2021
Police called to illegal rave to find pensioners queuing for vaccine
Majority of English people 'pleased' or 'not bothered' by prospect of united Ireland
You may also like
9 months ago
Gangs of London, the action-packed new gangster series coming to Sky Atlantic this week, looks incredible
10 months ago
Production on Peaky Blinders and Line of Duty suspended indefinitely
11 months ago
Peaky Blinders creator confirms the first plot details for Season 6
11 months ago
OFFICIAL: Season 6 of Peaky Blinders is now in pre-production
1 year ago
OFFICIAL: Peaky Blinders creator has finished the scripts for Season 6
1 year ago
How Season 6 of Peaky Blinders could introduce the most evil person in the history of the world
Next Page