"It's actually something I'm incredibly proud of."

Paul Mescal, the star of Hulu's much-discussed new series Normal People, has waded into the heated debate over the show's sex scenes. 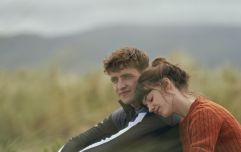 END_OF_DOCUMENT_TOKEN_TO_BE_REPLACED

Mescal, who is 24, was a guest on last night's Late Late Show, and told Tubridy: "The last thing I want to do is sit and judge people for that, because they're obviously entitled to their opinion.

"My own perspective is that we worked hard - myself, Lenny, Daisy (Edgar-Jones) and Hettie (Macdonald) - we worked very hard to make it feel like it was a real, accurate and truthful representation of sex amongst young people today and it's actually something I'm incredibly proud of and something I'm really proud to see on Irish screens, personally."

As well as hysterical criticism, the show's portrayal of sex has also won much praise for its sensitivity and its realism, with one caller to Joe Duffy saying that it formed the basis of a conversation about consent he had with his daughter.

The show was developed by Hulu, and is being broadcast by RTÉ in Ireland. The next episode will air at 10.15pm on Tuesday (5 May).

The Big Reviewski || JOE · Matt Damon, Camille Cottin, Abigail Breslin and director Tom McCarthy discuss new drama Stillwater
popular
The 50 most iconic songs of all time* have been revealed
PICS: The man with the biggest penis in the world has one unbelievable problem with it
CMO says it's "important to remember" infections in vaccinated people doesn't mean vaccines don't work
QUIZ: Test your all round wisdom with this general knowledge quiz
People think they've figured out the ranking of the viewers on your Instagram Stories
Netflix unveils its full list of classic movies arriving throughout August
WATCH: Matt Damon reacts to Dalkey bar creating a cocktail called The Matt Damon
You may also like
6 months ago
We predict which of the Irish nominees will win their Golden Globes
11 months ago
Paul Mescal says any Emmy recognition should be shared with co-star Daisy Edgar-Jones
1 year ago
Irish actor Paul Mescal nominated for an Emmy for Normal People
1 year ago
First look at the new psychological thriller series The Deceived, starring Paul Mescal
1 year ago
This idea could be the perfect plan for Normal People Series 2
1 year ago
Normal People finale smashes RTÉ Player record with 3.3 million streams
Next Page