It's from the golden age of The Simpsons.

Disney+ has shaken up the game when it comes to online streaming. It hasn't launched in Ireland yet, but when it does it will be home to all Star Wars content, all Marvel content, classic Disney animations, Pixar films and, of course, The Simpsons.

However, after its launch this week in the US, it became clear that the first episode of Season 3 - Stark Raving Dad - is missing from the archive.

Simpsons fans will remember this episode as the one where Homer is committed to a mental institution and befriends a large white man who believes that he is Michael Jackson (voiced by Jackson himself). The episode concludes with "Jackson" and Bart writing a birthday song for Lisa.

In the wake of Leaving Neverland, a documentary in which two men detailed alleged sexual abuses that pop-star Jackson committed against them when they were children, the episode was pulled from syndication, and will no longer be broadcast on TV.

It now seems that the same policy has been followed with regards to streaming. 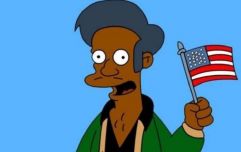 Hank Azaria will no longer voice Apu on The Simpsons

END_OF_DOCUMENT_TOKEN_TO_BE_REPLACED

Show-runner Al Jean explained the initial decision by saying: "What saddens me is, if you watch that documentary—which I did, and several of us here did—and you watch that episode, honestly, it looks like the episode was used by Michael Jackson for something other than what we'd intended it.

"It wasn't just a comedy to him, it was something that was used as a tool. And I strongly believe that. That, to me, is my belief, and it's why I think removing it is appropriate."

All other episodes, from Seasons 1 to 30, are available on the new service.


popular
Here are Ireland’s favourite takeaways, as per the National Takeaway Awards
TG4 to air a documentary on Ireland's homeless crisis this evening
"Totally unacceptable." Final year students at WIT hit out after extra module added to final semester
Seven leaders announced for RTÉ's multi-party debate
Met Éireann forecasts risk of sleet and possibly snow in parts of Ireland this weekend
QUIZ: Week 16 of JOE's 19 in 90 quickfire quiz is here
Eddie Rocket’s are giving away free kids meals this Friday
You may also like
1 week ago
Ireland Simpsons Fans announce it will not run candidates in 2020 Election
1 week ago
The writer of Die Hard and The Fugitive on his favourite references in The Simpsons and Brooklyn Nine-Nine
1 month ago
EXCLUSIVE: "From what I've heard, it is coming to an end" - Danny Elfman on The Simpsons
2 months ago
Disney+ to fix Simpsons formatting after viewers complain about missing jokes
3 months ago
QUIZ: Name the obscure characters from The Simpsons
3 months ago
Mike Mendel, long-time producer on The Simpsons, dies at the age of 54
Next Page