Robocop is right up there with Terminator and Predator and Die Hard in terms of classic action movies. Supremely violent, incredible performances and a scalpel-sharp IQ that you just don't see in the genre.

It was director Paul Verhoeven's big Hollywood breakthrough before he moved on to Total Recall, Basic Instinct, Starship Troopers and... eh... Showgirls. But he is on the comeback trail, after 2016's Elle got some serious awards attention and his upcoming 2020 release Benedetta is one of our most anticipated movies of the year. 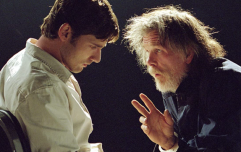 END_OF_DOCUMENT_TOKEN_TO_BE_REPLACED

As both Murphy and Robocop, actor Peter Weller became instantly recognisable, even though he spent the majority of the 1987 movie with his face behind a helmet. He would return for the first sequel (but not the terrible third one), and has enjoyed a varied career since, starring in everything from Sons Of Anarchy to Star Trek Into Darkness to 24.

However, over three decades later, he is still best known and loved for his turn in Robocop, and Irish fans will get the chance to celebrate that when he visits Dublin this March for a special screening of the classic movie.

Weller will be in town on March 14 for Dublin Comic Con, who are hosting the event screening at the Dublin Convention Centre, which will feature a special introduction by Weller himself.

The event will kick off at 7pm, and tickets can be purchased right here.

Weller won't be the only famous face gracing the Convention Centre in March, as other guests already announced include Stephanie Beatriz (Brooklyn Nine-Nine), Maurice LaMarche (Futurama, The Animaniacs) and Spencer Wilding (Rogue One, Guardians Of The Galaxy).

Full details on the Dublin Comic Con can be found here.

popular
Amazon Prime Video has quietly added 10 big new movies to its library
Yet another new Wetherspoons is set to open in Dublin city centre
The new restrictions likely to be introduced as NPHET meets with Govt
8 great new additions to Amazon Prime Video in December
The 50 most iconic songs of all time* have been revealed
House of Gucci has the best sex scene from a big Hollywood movie in years
PUP caused people to "get a bit lazy" says Supermac's boss
You may also like
18 hours ago
"It has a Beauty & The Beast aspect" - Kristofer Hivju on his role in The Witcher Season 2
1 day ago
Amazon Prime Video has quietly added 10 big new movies to its library
1 day ago
A beloved Christmas romance is among the movies on TV tonight
1 day ago
The JOE Movie Quiz: Week 130
2 days ago
Two big new Netflix shows and four more trailers you might have missed this week
2 days ago
The Toy Show DJ brothers have been offered their very first gig
Next Page