Pic: The song titles for the Dawn of the Planet of the Apes soundtrack are absolutely pun-tastic

We don’t care if they aren’t any good; the Oscar for best song absolutely has to go to one of these beauties for their name alone.

There were already any amount of reasons why we can’t wait to see Dawn of the Planet of the Apes on its Irish release this week; with the World Cup over, we need another form of non-football stimulation, the trailers look great and the first one was brilliant.

As if all of the above reasons weren’t enough, the soundtrack promises to be brilliant as well. In fairness, how could it not be when the title of nearly every single song on the soundtrack is a pun related to the movie itself?

END_OF_DOCUMENT_TOKEN_TO_BE_REPLACED

Nobody in their right mind could fail to be impressed by titles such as ‘Close Encounters of the Furred Kind’, ‘Monkey See, Monkey Coup’, ‘Gibbon Take’ and ‘How Bonobo Can You Go’, while we’re sure that the air of songs like ‘Gorilla Warfare’ and ‘The Apes of Wrath’ will be as ominous as their titles suggest. 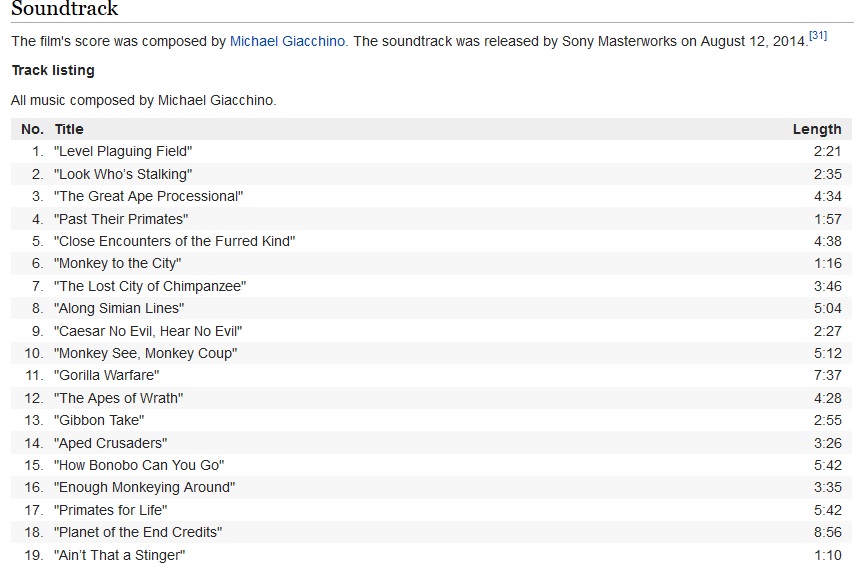 If we were to nit-pick, it would be at the absence of ‘Ape-ocalypse Now’ but those working on the soundtrack did a pretty good job. In fairness, they did have a hard act to follow…