Is this up your alley? *Innuendo absolutely unintended*

RTÉ2 and COCO Television are looking for people to get involved in a new series that explores the world of sex amongst young adults in Ireland.

If you're between the ages of 18-30 and would be interested in taking part in interactive sex-themed workshops where you learn about sex, health and wellness, then you're eligible to be a participant in a three-part show that will air on RTÉ2 this spring.

The show will be presented by Dr. Pixie McKenna, who is looking forward to being involved in a show on a topic that often makes Irish people particularly uncomfortable.

"It's sometimes hard to talk about sex and not blush, but let's face it none of us would be here without it!" said Dr. Pixie. 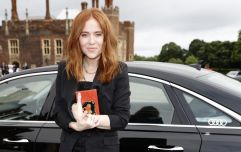 END_OF_DOCUMENT_TOKEN_TO_BE_REPLACED

"I will be looking at the good the bad and the ugly of sex in a fun educational way."

Interested in taking part? All you have to do is send an e-mail to sexclinic@cocotelevision.ie with a short paragraph about yourself and why you’d like to get involved.


popular
Take some time to watch the music video for James Blunt's 'Monsters'
The JOE Movie Quiz: Week 38
Chinese student who travelled from Wuhan in isolation in Waterford as precautionary measure
QUIZ: Name the missing word from these famous Dumb and Dumber quotes
Barry Keoghan has never looked scarier than he does in Calm With Horses
QUIZ: Name the missing word from these famous Derry Girls quotes
Edge makes electrifying return at WWE Royal Rumble
You may also like
1 week ago
Sinn Féin is "taking legal advice" due to being excluded from RTÉ leaders' debate
2 weeks ago
Dermot Bannon's Room To Improve special ends tonight
2 weeks ago
These were the most watched TV programmes in Ireland last year
3 weeks ago
The prequel to American Gangster starts on RTÉ this week and it has some excellent reviews
3 weeks ago
The Late Late Show's tribute to Marian Finucane was extremely emotional
3 weeks ago
RTÉ is planning special tributes to Marian Finucane this weekend
Next Page