Sam Lloyd, the actor who played Ted on Scrubs, has died

Actor Sam Lloyd, best known for his portrayal of hapless lawyer Ted Buckland on Scrubs, has passed away at the age of 56.

He had been diagnosed with an inoperable brain tumour in early 2019, which was later discovered to be the result of metastasised lung cancer. 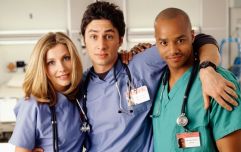 END_OF_DOCUMENT_TOKEN_TO_BE_REPLACED

Lloyd was also known for his roles in other popular shows such as The West Wing, Desperate Housewives and Modern Family.

In addition to being an actor, Lloyd also garnered acclaimed with his a cappella band The Blanks, who featured on Scrubs on several occasions.

Scrubs co-star Zach Braff led tributes to Lloyd on Twitter, writing: "Rest In Peace to one of the funniest actors I’ve ever had the joy of working with. Sam Lloyd made me crack up and break character every single time we did a scene together. He could not have been a kinder man. I will forever cherish the time I had with you, Sammy."

Scrubs creator Bill Lawrence wrote: "Spent the night watching clips of Sam (The songs! The greatest sweaty pratfall of all time!) Those who reached out, our “Scrubs family” appreciates it - he had the biggest heart of all of us. But now send all those good thoughts to his family. And to your own loved ones."

Lloyd is survived by his wife and daughter.

The Big Reviewski || JOE · The Big Reviewski with Andy Serkis, Squid Game follow-ups & the return of Succession
popular
Claire Byrne was having absolutely none of Nigel Farage's claims on Monday night
Netflix has revealed the release date for new episodes of Ozark
An asylum seeker in Cork is on hunger strike to attempt to remain in Ireland
An underrated Denzel Washington thriller is among the movies on TV tonight
Confusion reigns over social distancing element to nightclub reopening plan
The 100 greatest TV shows of the 21st century have been revealed
Forest Whitaker's intense Oscar-winning role is among the movies on TV tonight
You may also like
1 year ago
Scrubs creator addresses three episodes that have been removed from streaming services
1 year ago
Any Scrubs fans out there should really be listening to this podcast
1 year ago
QUIZ: We give you the theme song, you tell us the TV show
1 year ago
Zach Braff and Donald Faison have launched their own Scrubs rewatch podcast
1 year ago
QUIZ: Can you get 10/10 in this tricky Scrubs quiz?
2 years ago
A GoFundMe has been set up to help the actor who played Ted on Scrubs beat cancer
Next Page