We think it's impossible to describe the seismic influence that David Fincher's seminal '95 occult thriller Se7en has had on the film industry.

END_OF_DOCUMENT_TOKEN_TO_BE_REPLACED

The story about detectives Mills and Somerset, Brad Pitt and Morgan Freeman, and their search for the psychotic murderer John Doe is a modern day classic and today marks its 20th anniversary.

Consider this your spoiler alert warning but the seven deadly sins have never looked this deadly before. Here is why...

Screenwriter Andrew Kevin Walker used a particularly terrible time in his own personal life and managed to turn it into one of the best cat and mouse screenplays ever.

END_OF_DOCUMENT_TOKEN_TO_BE_REPLACED

The scribe was primarily influenced by an unhappy time living in New York City working in Tower Records, all the while still trying to make it in the film industry. He channelled all of his negativity, frustration and disillusion with the world into something magnificent.

Just like The Exorcist or The Omen before it, Walker heavily relied on the Bible for his villainous inspiration but he cleverly borrowed from the gothic classics 'Dante's Inferno' and John Milton's 'Paradise Lost' also.

The script was also very flexible as seen by the fact that during the film shoot, Brad Pitt broke his arm which led to the injury being written into the script. The film is darker than a pint of Guinness but it's easy to forget that it does have some genuine light touches as well.

For example, the first exchange between Mills and Somerset has this classic line, "Look. It’d be great for me if we didn’t start out… kicking each other in the balls.” 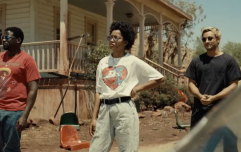 END_OF_DOCUMENT_TOKEN_TO_BE_REPLACED

John Doe even gets a funny moment when Kevin Spacey dryly says that he didn't kill the dog found lying on the road in the desert.

The director paid the Se7en writer the ultimate compliment in Fight Club, he named the three detectives Andrew, Kevin and Walker as a tribute to Se7en's screenwriter.

Fincher wanted a shaky, uneven and dirty looking opening credits sequence because he felt that it would fit closer to the killer John Doe’s mindframe.

Apparently Fincher also felt that these credits also gave the audience an early indication of just how ugly the film would get. He was completely right.

The opening credits (soundtracked by Nine Inch Nails' Trent Reznor) are a grimy, shocking and ominous introduction for what's in store.

Kudos on the decision for omitting Kevin Spacey's name also because the director wanted audiences to be completely surprised by the killer's identity...

No amount of words can replicate the original shock of seeing the following scene on the big screen for the first time. Take a look...

Did you know that the role of Mills was originally offered to Denzel Washington who turned it down because he considered the script to be "too dark and evil"?

Pitt jumped at the chance though, turning down a role in Apollo 13 just so he could do the movie, such was his belief in the material. Ironic that Denzel would later go down this route with The Bone Collector and Fallen.

Al Pacino was considered for the role of Somerset but he opted to star in City Hall instead. Pitt and Freeman work so brilliantly together on-screen that it's hard to imagine anyone else in the roles.

The two characters are complete polar opposites; temperamental and calm, edgy and composed, rookie and experienced detectives paired up to solve the case of their respective careers.

The film was originally offered to David Cronenberg and also to Pan's Labyrinth director Guillermo Del Toro who turned it down because he didn't subscribe to the film's dark vision of the world.

It may be hard to imagine but David Fincher was under immense pressure coming into the making of Se7en.

His first film Alien 3 was a critical and commercial flop, mainly due to studio interference, and despite his impressive C.V of work in commercials and music videos, the knives were definitely out.

Fincher silenced everyone and has since went on to become one of the most talented and important directors in the industry having made The Game, Fight Club, Zodiac and The Social Network amongst others.

It's the small touches in Se7en that make it so magnificent like Brad Pitt's torch running out of batteries, the ominous lighting in John Doe's apartment, the level of intricate and disturbing detail in every crime scene or the decision to shoot the entire film in the rain.

Most importantly, Fincher managed to get some amazing performances from his actors.

Executives were originally completely against the ending of the movie because they felt that it was too negative. To their credit, Brad Pitt and Morgan Freeman refused to promote the film if the suits changed it.

The ending is one of cinemas greatest climaxes for one simple reason, the bad guy wins...

If you prefer a more humorous ending then this Morgan Freeman narration of the moment when he opens the box is hilarious.

Before Se7en was released there was a time when films were filled with imagery of sunshine, rainbows and puppies. Okay, maybe it wasn't that bad but David Fincher's seminal film changed the aesthetic of Hollywood thrillers.

A dark, gloomy and gothic look became cool all of a sudden as the serial killer genre received a renewed lease of life. Ironic, eh?

Kiss The Girls, Frailty, The Bone Collector, The Devil's Advocate, From Hell, Fallen, 8MM and End of Days all stole something from Fincher's classic.

None of them bettered it though, no one can. It even looks great as an 8-bit film.

popular
Netflix has just added an incredibly tense 97-minute thriller
Stunning Mayo beach named the best place to swim in Ireland and the UK
A county-by-county breakdown of the average rent in Ireland as rent inflation reaches record high
The most "Instagrammable" road trips in Ireland have been revealed
Irish person dies after drowning in Spanish resort swimming pool
Nearly 100 flights delayed at Dublin Airport on Monday
18 counties hit with weather warning as temperatures set to reach 29 degrees
You may also like
4 days ago
This new true-life disaster show is being called one of the grimmest, bleakest shows ever made
5 days ago
All the new releases coming to Netflix, Prime Video, Disney+ and cinemas in August
5 days ago
WATCH: The trailer for The Banshees Of Inisherin has arrived
6 days ago
Netflix has just added 20 huge movies to its library
6 days ago
An "unadaptable" adaptation and 8 more new movies & shows to watch this weekend
6 days ago
REVIEW: Thanks to a low bar, Prey is the best Predator movie since the original
Next Page