15 years ago, the director of Donnie Darko destroyed his own career

That's alright, most people don't. Those who do may well present themselves as PTSD-addled wrecks, or simply run a mile at the mere mention of its name. Southland Tales, you see, was supposed to be a pop culture game-changer the likes of which had rarely, if ever, been seen before.

And some of us bought all the way in. We had good reason, after all. Surely the visionary auteur behind the turn-of-the-decade masterwork that was Donnie Darko wouldn't steer us wrong? Clearly the mind behind that jolt of electricity had more incredible stories to tell? And yet, Richard Kelly would spectacularly tank his own career with his next move.

Released to the public on 14 November, 2007 – heavily re-tooled following a notoriously disastrous screening at the Cannes Film Festival in May of the previous year – Southland Tales promised so much, but delivered so very, very little.

Let's try and explain the plot. Deep breath. Following a nuclear attack on Texas that provoked World War III, America in 2008 has been reduced to dystopian chaos, with heavy surveillance, an aggressive military presence and a censored Internet all in the mix as a pivotal election – decided by the voting results of just one state – hangs in the balance.

Meanwhile, a pair of identical twin brothers – or are they? – played by Sean William Scott swap roles when one is kidnapped by a terrorist cell and the other takes his place as a police officer so they can enact a complex false flag operation in a bid to bring down the totalitarian government regime.

Oh, and the movie has an exposition-heavy voiceover from Justin Timberlake, who plays a battle-scarred military veteran who was injured via friendly fire and now spends his days working as a sentry sniper on Venice Beach. He also used to be a famous movie star, not that it matters.

Got all that? There's plenty more, too, including machine guns that can bend around corners, car advertisements that show the vehicles having sexual intercourse (it's satire, don't you get it?), a new energy supply called 'Fluid Karma', a mysterious arms dealer who operates out of an ice cream van (played by Highlander himself Christopher Lambert), a barely-explored side plot about people having their thumbs cut off, and plenty of repeated imagery ideas from Donnie Darko.

All of this is drenched in post-9/11 paranoia and political prescience – acolytes of Southland Tales, for they are out there, will tell you that Kelly's film 'predicted' Donald Trump's America and while that's quite a stretch, he definitely was ahead of his time in some respects. And it's not exactly unusual for a young, fired-up filmmaker to take a venomous bite out of the world around him. He just wound up tripping over the most convoluted story possible. 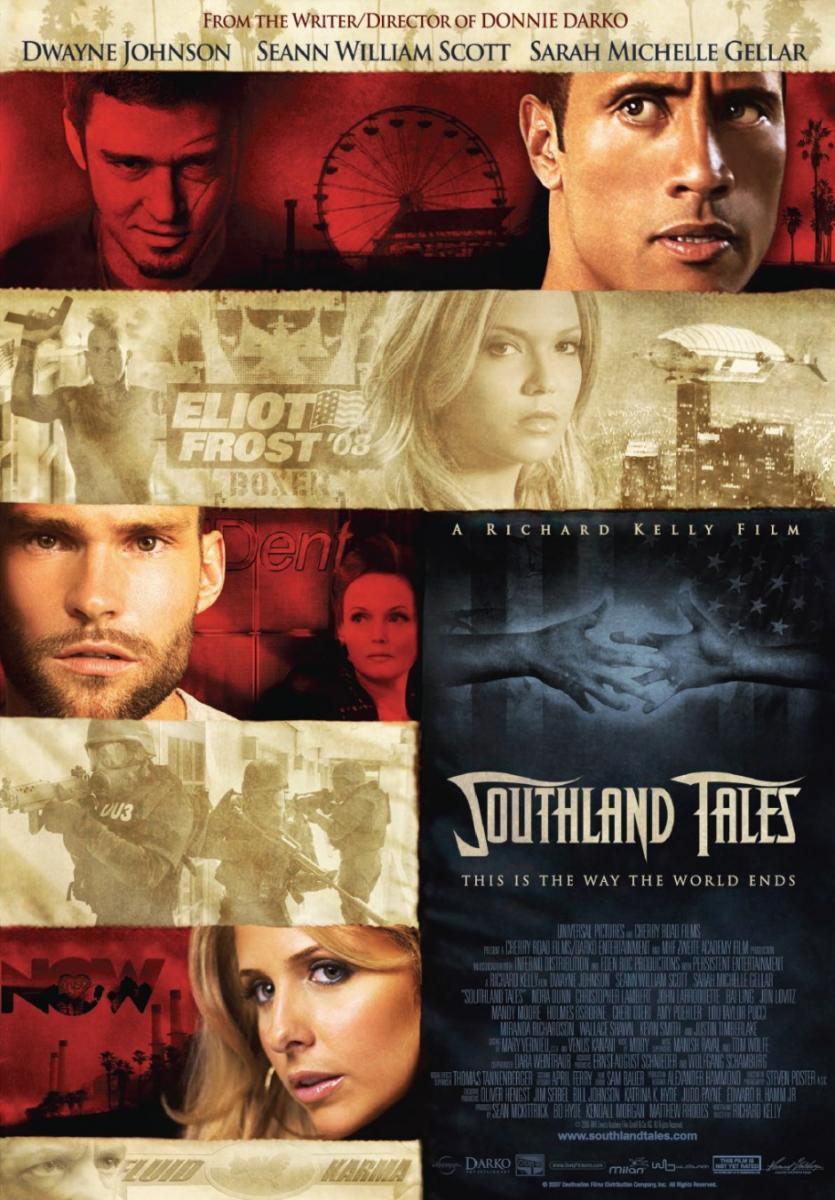 The threads simply do not stitch together. Having just dropped €3.99 of my hard-earned to return to the garish scene of the crime for the first time since 2007, I can confirm that Southland Tales is a fucking mess. It opens like those video games that feel the need to ambush you with endless information screens before you can actually play the thing. Justin Timberlake, god bless him, is saddled with around 10 minutes of explainer text that the viewer cannot hope to possibly keep up with. Not because it's asking a lot, but because it's so brutally overwritten.

Oh, and one little detail we've left out so far – Southland Tales is split into three chapters, numbered IV, V and VI. Kinda like Star Wars. Where are I, II and III, you ask? Well, they were actually graphic novels that were released before the film came out, so I hope you studied up! Credit to Richard Kelly for his ambition and for wanting to create a transmedia pop culture event, but people just weren't up for putting the work in.

And you can't blame them, really. Especially when Southland Tales is so desperately all over the place. Even if connected to a larger body of work, the standalone film part needs to function as its own thing for any person who is going into it blind. The two hours and 24 minutes Kelly arrived at in the end – the first cut, which was booed off the screen at the aforementioned Cannes Film Festival, ran for three hours and was still unfinished – just do not sync up correctly. You need an instruction manual to even attempt this, hence Timberlake's voiceover.

Speaking of, let's have a moment for Justin Timberlake, who takes the spotlight for the film's most memorable and purely enjoyable sequence.

About halfway through the narrative, Timberlake's character, Pilot Abilene, enters into a seemingly drug-influenced fugue state fever dream, shattering the fourth wall for a two-and-a-half minute sequence in which Abilene struts around a smoke-filled arcade, slamming back cans of Budweiser while enjoying the affections of a chorus line of women dressed as 'sexy' nurses with Marilyn Monroe wigs as they engage in a choreographed dance routine, all played out to the sounds of 'All These Things That I've Done' by The Killers, which Timberlake mimes down the camera lens throughout.

It is, frankly, an audacious piece of cinema – so bold, in fact, that Kelly filmed the scene without first securing the rights to use the song, although the band would ultimately grant permission. And thank heavens they did, for it unleashes and re-contextualises the song quite brilliantly, helping Kelly along to the only effective and most undeniably potent realisation of his vision; the blood-soaked, fucked-up, beautiful and broken American dream pin-balling between fleeting joy and abject despair.

Timberlake, who was only available to shoot his role for a total of 24 hours before coming back later to record his narration, admitted in a 2011 interview – "To me, Southland Tales is performance art. I still don’t know what that movie is about."

One thing's for sure; his big scene is indeed the definition of performance art. Seriously, no matter how many times I happen upon this moment, I am completely hypnotised.

Sadly, that's two-and-a-half fantastic minutes out of 144. Back to the rest of the movie. Here are five separate instances of actual dialogue said by the actors in this thing:

"You want to fuck or watch a movie?"

"Scientists are saying the future is going to be far more futuristic than they originally predicted."

"If you don't let me suck your dick, I'm going to kill myself."

That last mouthful is delivered by Sarah Michelle Gellar, who is just as out of her depth as every other actor on display in Southland Tales. In explaining his casting process, Kelly noted that he purposefully selected people who he felt were typecast in a bid to play with audience perception and give the actors something more substantial to do than they were previously used to. Admirable? Perhaps. Destructive? Definitely. 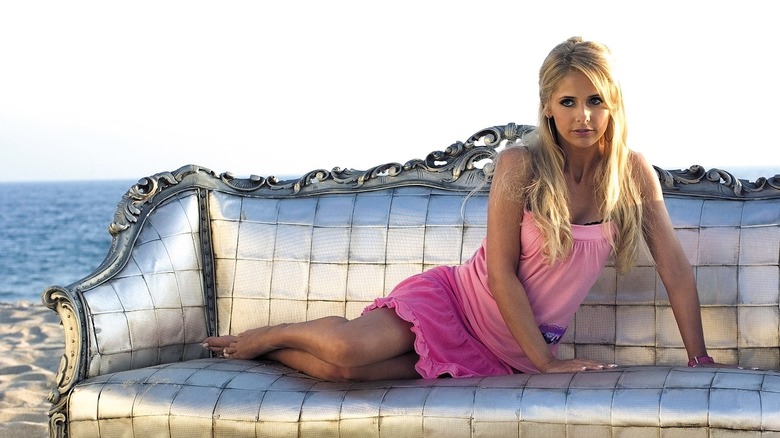 These days, The Rock is king of the box office with Black Adam representing the latest jewel in his endlessly bankable crown. Back in the mid-2000s, however, he was an unproven commodity in Hollywood. Decent action efforts like Welcome to the Jungle and Walking Tall showcased his brawling bona fides, but that was a given considering his background in wrestling and college football.

Be Cool, the atrocious attempt that was a Get Shorty sequel, at least got one thing right – it showed that Johnson could transfer his comic timing from the squared circle to the big screen, and even show a little vulnerability, too.

That said, he certainly wasn't ready to take on something like Southland Tales and the split personality roles of Boxer Santaros and Jericho Cane; two sides of an amnesiac action hero caught up in an apocalyptic conspiracy with soap opera underpinnings.

Rock didn't have the chops, nor did the material he was working with. And so he was hopelessly adrift, despite visibly giving it his all. Speaking to Indiewire while promoting Fighting With My Family in 2019, Johnson was candid in expressing just how much the failure of the project stung, both personally and professionally. 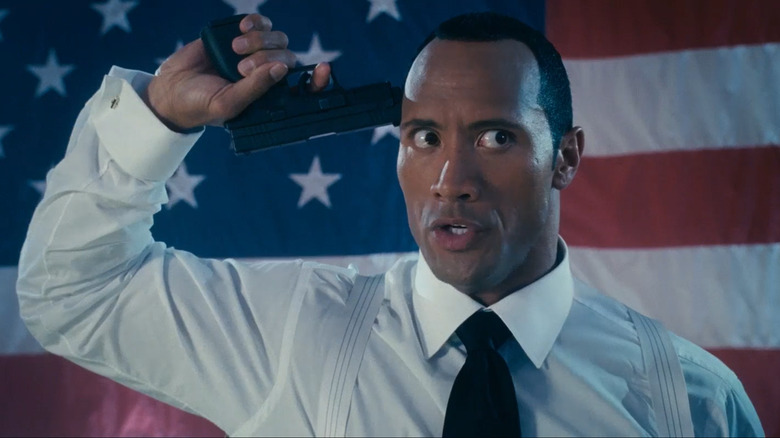 "Southland Tales hurt," he said. "I took it in the gut. We all went into that movie having so much trust, and a script that was complex and interesting. At times, you’re like, ‘What the fuck is going on?’. Richard Kelly, who was a good friend, was so passionate about that movie.

"It was tough because we went all the way over there and we were shrouded in mystery,” Johnson said, reflecting on the aggressive reception the film met with in Cannes. "We were the movie that everyone wanted to see, but we had no business being at Cannes, because it was unfinished.

"When the screening ended, we were all on our Blackberries at that time, and our publicists were, like, sweating," Johnson explained. "We had to walk from there directly to our press conference. We sit down in the press conference and someone was like, ‘They fucking hated the movie. So just be prepared.’

"But we had to be there for another three hours. So we sit down and the first question, I’ll never forget, is a journalist standing up and saying, ‘I’ve got to be honest with you, I’ve never seen so many people walking out of a movie. What was it about this movie?’”

What indeed. Following its release proper in 2007, Southland Tales made a total of $374,743 at the box office, from a production budget of $17 million. Critics dove in with the hottest of knives. Any way you play it, it was an utter disaster. Donnie Darko wasn't initially well-received, nor did it make a crazy amount of cash, but time served it well. Southland Tales, however, effectively spelled the end of a promising filmmaker, and it's hard not to consider the passion project an act of self-sabotage. 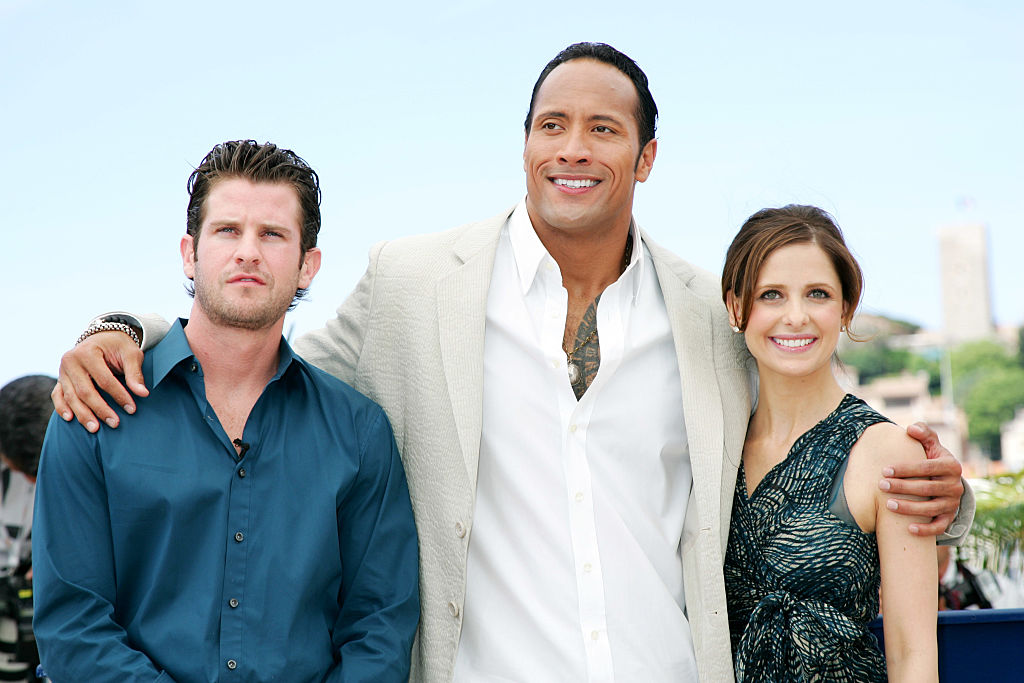 Kelly would get a shot at redemption in the form of The Box, a short story adaptation featuring Cameron Diaz, James Marsden and Frank Langella.

The Box arrived in 2009 with a juicy premise – would you push a button in order to receive riches at the expense of a seemingly completely random person's life? Sounds like a can't-miss home run, and yet the final product was grey and generic. Furthermore, it barely turned any kind of profit. Kelly hasn't directed a feature film since, nor has he so much as dipped a toe into the world of television / streaming production.

Instead, Kelly – who also wrote the script for the late Tony Scott's 2005 bounty hunter thriller Domino – has focused his energies on just one creative endeavour; finding a way, any way, to tell more Southland Tales.

That's the strange, kind of troubling thing – Kelly still believes in his dream to the point he thinks he can one day revive and restore it. In conversation with the AV Club as part of a deeply illuminating oral history of Southland Tales in early 2021, he noted:

"I’ve written a new script, and I think it’s really exciting. And I think it’s it’s very cinematic, and it brings a whole new dimension to the movie. I think it will make people look at the existing movie in a completely new light. In a lot of ways, it adds a whole lot. It’s the bigger, completed version of Southland Tales that I’ve been working to try and complete. And we’ll see what happens. I hope it happens.

" You know, I’ll dedicate the rest of my life trying to make it happen," Kelly continued. "I will continue working on Southland Tales until the day I die, whether or not we get to make more of it or not. I certainly hope we do, and that we will. But I will be working on this. I’ll just keep working on it until they put me in a mental hospital, or an old folks home, or they take it away from me."

What can you say? The man's a pimp. And pimps don't commit (career) suicide.

Apart from when they do.