Now with added Irish-ness, thanks to the presence of local legend Brendan Gleeson, who is on the hunt for a serial killer in this new thriller series Mr. Mercedes.

The show debuted about a month ago in the States to some very impressive reviews, with particular praise going towards Brendan himself. 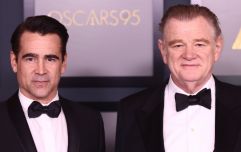 END_OF_DOCUMENT_TOKEN_TO_BE_REPLACED

The Huffington Post said that "Gleeson does a first-rate job with a character we’ve seen before, the tormented cop who plunges into a battle where he’s seemingly outflanked and outgunned. [The villain] is suitably troubling as a kid who represses such waves of rage and frustration that we don’t doubt it could explode somewhere."

Gleeson plays retired police detective who finds himself being taunted by a demented serial killer (played by Fortitude's Harry Treadaway) with a series of lurid letters and emails, forcing the ex-cop to undertake a private, and potentially felonious, crusade to bring the killer to justice before he can strike again.

Mr. Mercedes is produced by the minds behind Game Of Thrones and Lost, and has been adapted by the guy who brought us one of this year's best new shows, Big Little Lies, so a lot of very impressive talent involved both in front of and behind the camera on this one.

The show kicks off on RTÉ One tonight from 10.15pm and you can check out the trailer below:

popular
Nicola Bulley's phone found by the river 'could be a decoy', diving expert suggests
Teenager killed in shark attack after swimming with dolphins in Australia
Amazon Prime Video has just added 21 big movies to its library
The Last Of Us Episode Five will premiere days earlier in Ireland and UK
One of the best crime thrillers ever is among the movies on TV tonight
5 years ago, Hollywood took a massive gamble on a huge sequel... and lost big time
Shock as blues singer beats Adele, Beyonce and Taylor Swift to win Song of the Year Grammy
You may also like
3 months ago
WATCH: Even the director of The Banshees Of Inisherin was shocked by his own movie
3 months ago
REVIEW: The Banshees Of Inisherin is not In Bruges 2, and here's why that's great
3 months ago
Here's the line-up for this week's episode of The Late Late Show
3 months ago
WATCH: Colin Farrell surprises SNL viewers during hilarious Brendan Gleeson monologue
5 months ago
The Banshees of Inisherin is getting even better reviews than In Bruges
1 year ago
25 years ago, Brendan Gleeson kicked off one of Hollywood's most OTT plots
Next Page