The very strong connection between Loki and Rick & Morty

Fans of the animated show will definitely spot this...

When you hear a show is going to be a time-and-space-travelling comedy-mystery, the first thing that comes to mind is probably going to be Rick & Morty.

However, with the arrival of the first episode of Loki, that mish-mash of genres is also applicable here.

END_OF_DOCUMENT_TOKEN_TO_BE_REPLACED

That similarity of tone isn't entirely accidental either, as the head writer of Loki was also a writer and producer of Rick & Morty.

Michael Waldron was only the writer of one episode of Rick & Morty - the toilet-centric 'The Old Man and the Seat' - but he was also a producer across multiples seasons of the show, and many of those episodes featured Rick and Morty travelling across space and time.

However, the connection between the two shows goes even deeper than that...

On the very first episode of TBR Spotlight: Loki [LISTEN from 39:35 below] Rory and Eoghan break take a look at the even bigger similarity.

Obviously spoilers from this point on, so maybe go and watch the first episode of Loki first, but we're assuming you're all caught up on the show by now.

In that first episode, we discover that Loki has been brought to a place outside of the regular rules of space and time, because the authority figures there need his specific help to track down a dangerous criminal. And, as we're told at the end of the first episode, that criminal is Loki himself, but from a different timelines. 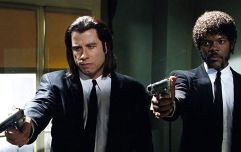 END_OF_DOCUMENT_TOKEN_TO_BE_REPLACED

Fans of Rick & Morty might feel some distant memory bells chiming in here, as a very similar plot takes place during that show.

Rick is arrested and brought to the Citadel of Ricks, as he is accused of being a rogue, criminal version of Rick, one that is hopping across timelines and killing the other versions of himself, and it is up to this reality's Rick to track down the criminal variant of himself.

That isn't to say that what happened in that storyline will follow through exactly here, but the similarities are definitely there to be found.

How this reality's version of Loki will react to discover that another version of Loki is even more murderous and successfully dangerous than he is, we'll have to wait and see...

The first episode of Loki is available to watch on Disney+ right now, and the second episode will arrive on Wednesday, 16 June.

The Big Reviewski || JOE · The Big Reviewski with Ray Liotta, Goodfellas facts & Tom Hanks making us cry
popular
The 50 most iconic songs of all time* have been revealed
Jason Byrne forced to cancel tour dates due to a heart condition
PICS: The man with the biggest penis in the world has one unbelievable problem with it
The JOE Friday Pub Quiz: Week 262
BBC reporter covering petrol shortage called Phil McCann
BBC reporter Phil McCann responds after going viral
Melissa McCarthy's most-overlooked comedy is available to watch at home this weekend
You may also like
16 hours ago
Daniel Craig says he is thinking of retiring to Ireland
21 hours ago
QUIZ: How well do you know the life and work of Denzel Washington?
21 hours ago
How to watch Daniel Craig's 007 movies at home before No Time To Die arrives next week
1 day ago
QUIZ: The Ultimate Movie Gangster Quiz
1 day ago
One of the best-loved comedies of the 90s is among the movies on TV tonight
1 day ago
20 years ago, this Bond movie changed its ending following the events of 9/11
Next Page