This could have a huge impact.

The series was Emmy-nominated and had real-world consequences, and Kelly was arrested and formally charged with 10 counts of aggravated criminal sexual abuse. Since then, Kelly has been charged with multiple other crimes, including federal sex trafficking. 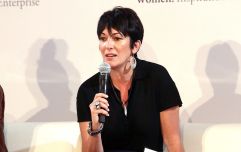 A new documentary on Ghislaine Maxwell is coming to Sky

END_OF_DOCUMENT_TOKEN_TO_BE_REPLACED

The Kelly series featured in-depth testimony from alleged victims of the singer and their families.

Now, Lifetime will turn its attention to billionaire financier and convicted sex offender Jeffrey Epstein. Epstein was arrested on July 6 of this year and charged with sex trafficking and conspiracy to traffic minors for sex. Prosecutors allege that he brought as many as 40 girls under 18 to his mansion for the purposes of sex.

Epstein, who was famously friends with the likes of Bill Clinton and Donald Trump among others, is now awaiting trial on these charges, and has been denied bail. He was already convicted of similar offences in 2008, but spent just 13 months in prison - and spent most of that time on work release.

The new project is in development in association with award-winning filmmakers Anne Sundberg and Ricki Stern (Reversing Roe, The Preppy Murder). New York Times journalist Christopher Mason is also attached to the project.

The project is still in its early stages, and there's no timeframe for when it might be released yet.

The Big Reviewski || JOE · The Big Reviewski with Andy Serkis, Squid Game follow-ups & the return of Succession
popular
Gardaí investigating after man robs hotel at knife point in Kerry
The JOE Friday Pub Quiz: Week 265
QUIZ: Can you master this General Knowledge Quiz?
Investigation launched after window smashed at Canada Goose store in Dublin
QUIZ: Get your quiz on with this General Knowledge Quiz
The JOE Movie Quiz: Week 124
The JOE Music Quiz: Week 77
You may also like
6 days ago
Police taking "no further action" against Prince Andrew
9 months ago
Ghislaine Maxwell was tracked down by police using data from her mobile phone
1 year ago
Ghislaine Maxwell, former girlfriend of Jeffrey Epstein, arrested by the FBI
1 year ago
Three-part documentary series about the death of Jeffrey Epstein is being made
1 year ago
Jail video of Jeffrey Epstein’s first suicide attempt was deleted
1 year ago
Surveillance video from Jeffrey Epstein's first suicide attempt is "missing"
Next Page