The Sons of Anarchy spin-off has released even more images

Sons of Anarchy fans will be watching this.

A few months ago, we revealed the first details about Mayans MC, the spin-off show from Sons of Anarchy.

As fans of the show will know, the Mayans MC were a pivotal gang in SOA's seven-season run as they often rotated between SAMCRO's friend and foe. 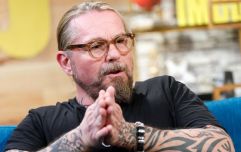 END_OF_DOCUMENT_TOKEN_TO_BE_REPLACED

Well, after the first official image was released, we've been treated to a brief teaser in which we're told that "If the Mayans want a future, we gotta choose a new side."

It isn't clear what that means for the MC and the Reyes family, but it looks like there's a new era in store.

As for the plot, the story will focus on SAMCRO's rival motorcycle group and follow a young club prospect named EZ Reyes (JD Pardo) a Mayan MC recruit that's torn between the woman he loves and his loyalty to the gang. Fresh out of prison, EZ must "carve out his new outlaw identity in a town where he once was the golden boy who had the American Dream within his grasp."

As of yet, there's no official announcement about when the 10-episode series will premiere, but the latest images have offered us an interesting look inside the riders' clubhouse and the club president, played by Michael Irby.

FX included these images as part of their sizzle reel and you can watch the teaser in full.

Make it mean something. See what’s coming to FX Networks in 2018. pic.twitter.com/V1uSgLHyMB